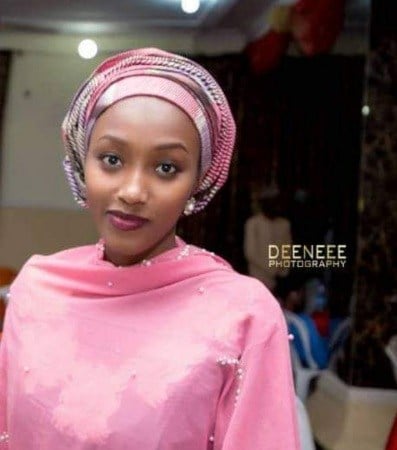 A female student from Katsina state has impressed many online after scoring the highest Cumulative Grade Point Average (CGPA) in the history of the Physics department of Usmanu Danfodiyo University Sokoto.

Miss Zainab Bashir graduated with a CGPA of 4.87 which is the highest CGPA anyone had gotten since the department was founded.

Zainab who is an indigene of Katsina stated in an interview with Katsina Post correspondent, that her ambition before was to study medicine.

However, she was offered Physics which she was very good at while in secondary school. She fell in love with it and with God’s help, made the best of it.

“My first choice was to study Medicine and Surgery but then, Almighty Allah guided me to the potential in me which I didn’t realise before. Physics in secondary school was such a nice subject to me that I had no fear of approaching it’s calculations and it was always my best science subject.

So I regard what happened with my jamb score as a blessing in disguise. Alhamdulillah!”, she said. 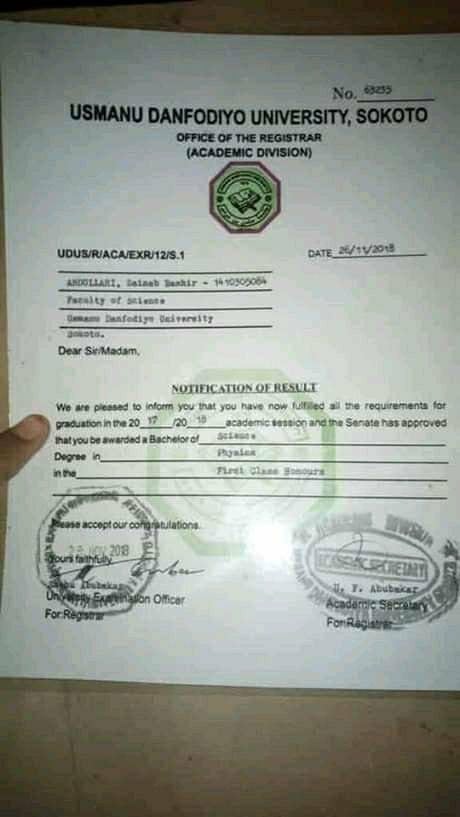 “Since the time I lost my first choice I groomed my ambition to have this class of degree.
And this is not the end of my dream as I hope to pursue the brightful colours of my career In Shaa Allah!”

She explained that the advice of her father and the mindset of never giving up spurred her morale for chasing such a tremendous feat as she had, over time, been discouraged by many people that her mission could never be achieved.

When asked whether she had ever stumbled due to wrong grades or gotten discouraged by failure, she replied that she never experienced such except for her final year project where she was given a C in spite of her hard-work and dedication and all are previous results were either As or Bs.

Zainab who lived in Sokoto town with her parents all through her program explained that, she never engaged in popular style of reading among students called TDB (Till Day Break).

As a young lady endowed with a beautiful face, speaking on how she was able to avoid distractions from the opposite sex, she explained that the fact that she was engaged made her safe from that and also, she was diplomatic in dealing with boys and prioritizing her studies more than any other thing.

The valedictorian also explained that she didn’t engage in any extra-curricular activity while she exploited her leisure time to watch dramas and chit-chat with friends as all work and no play makes jack a dull boy.

When asked what her plan after graduation is, she said that she wishes to get married and become a teacher/lecturer who will impact knowledge on young minds.

She finally advised fellow students to focus on their studies and to set their priorities straight.

Related Topics:Best graduating studentladyStudentUniversity
Up Next

ASUU Strike: We May Not Honour FG’s Call Again – ASUU