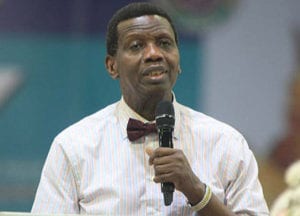 The General Overseer of the Redeemed Christian Church of God, Pastor Enoch Adeboye, has spoken out on why can’t be CAN president.

According to a Vanguard report, Pastor Enoch Adejare Adeboye, the General Overseer of the Redeemed Christian Church of God, RCCG, has given reasons why he has rebuffed all entreaties for him to assume the headship of the Christian Association of Nigeria, CAN.

Addressing a mammoth crowd of worshippers at the ongoing 66th annual convention of the church on Wednesday night, the great evangelist, the apostle of humility regarded as One of the 50 Most Influential Individuals in the Universe, said people have been approaching him with proposal to head the umbrella body of Christians in the country.

“Whether you believe it or not people have approached me, they want me to be president of the Christian Association of Nigeria, CAN, but I have said No! No!! No!!! That is not what I am after. When I accepted Jesus Christ, there was only one demand I made from God and that is that I do not want to be a mediocre. I don’t want to be an ordinary Christian. I want to excell,” he noted.

For the avoidance of doubt, he emphasized that his dream was not to become a General Overseer, or any such title, adding: “I wanted to excell as a Christian because it’s a tradition that I have built from childhood. When I was in primary school, each time I come out second in examination, I cried and cried because I was asking myself, the fellow who came out first is a human being like me. How long must I remain an ordinary Christian?”

And after becoming the General Overseer, somewhere on this camp ground, “I prayed a desperate prayer to God, and I said Father, I told You at the beginning; I don’t want to be an ordinary Christian, I need Your power to excell. If You are not going to give me, take me away. And He answered and there was an earthquake. The ground shook and people in far away Ijebu Ode heard it but they didn’t know that somebody was praying here on the camp ground.”

Preaching his second plenary message, “The Spirit of Excellence,” at the ongoing 66th annual Convention of the church at the Old Auditorium, he told a large crowd of worshippers “We will not stop building until we get an auditorium the size of Ibadan; then will I say we have started.”

Lamenting the complacency of today’s Christians who often celebrate small accomplishments, he said when RCCG moved to the Redemption Camp, it started with a 100 x 50 meter Auditorium which was the largest in Africa then and members felt “we have arrived. But not long after, we doubled the size. And not many years hence, we doubled that one until we realized that there was no more room for expansion.”

Drawing inspiration from Biblical accounts of Daniel, Caleb, Elijah and Elisha, Adeboye asked why will any Christian be satisfied of being an average Christian when you can really excell or dominate? Your vision should be so high that it will take only God for it to come to pass.

“Why must you, the son of the most High God, insult God by your request: Oh God, By this time next year give me a car even if it’s a third hand car….why must you come in a third hand car when your Father is the owner of the Universe. Why not pray to Him to give you a brand new bus to enable you bring hundreds of people to next year’s convention.”

You may say; you don’t know the nation where I come from; they kill Christians there….Is it not written that

“When I charged my children that we must double our church every year, some of them were upset. But after explained to them what that meant…that each member should win one soul in a year, they became angry and starting asking questions whether I truly loved them as children….because they know what I do and why should I ask for one soul in a year?

Adeboye further bemoaned Christians of today, who are often satisfied with small achievements, saying: “why are you satisfied being average when you are the son of the Owner of the Universe, King of kings and the Lord of lords.”

As a lecturer, Daddy GO explained that excellence is about “something so good that it cannot even be better. There is a link between excellence and dominion. When we talk about excellence, there are degrees of excellence. One of the ways to know the secret of an excellent spirit is that it keeps getting better and better.”

To excel, to really be the dominant one, according to Pastor Adeboye, you need the spirit of excellence. Emphasizing that excellence is a spirit, he noted that Joshua was full of excellence and wisdom because Moses had laid his hand on him.

Related Topics:Pastor E.a Adeboye
Up Next

Happy Sunday: Why Is Total Forgiveness Difficult Amongst Christians