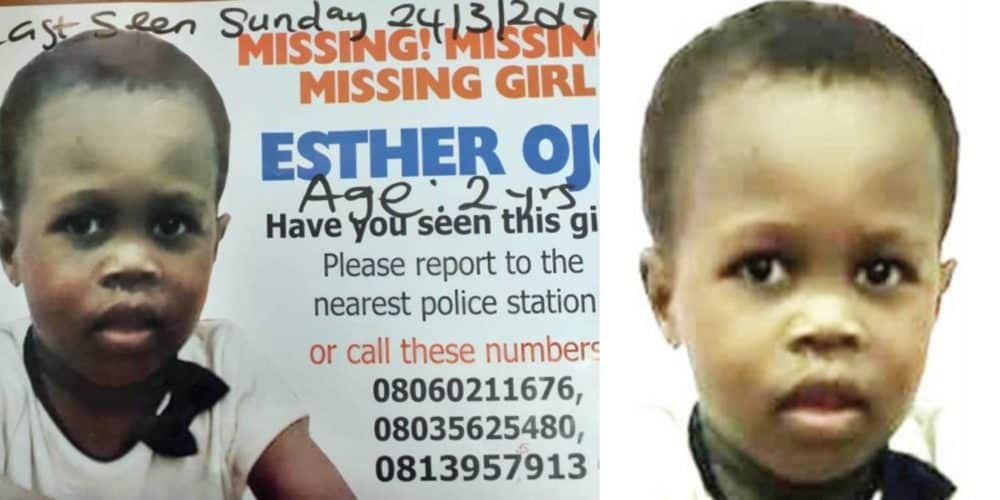 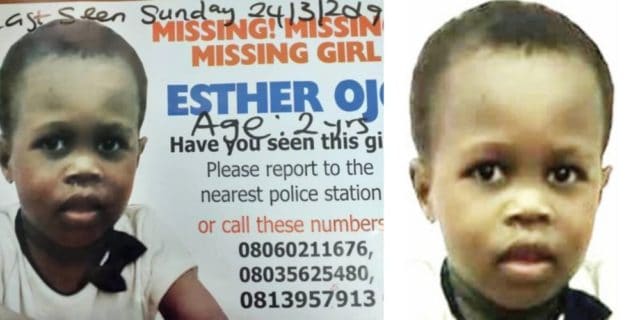 Two-year-old Esther Ojo pictured above has been declared missing after she disappeared while attending last Sunday’s service at a Mountain of Fire and Miracle Ministries’ church at the Pen Cinema, Agege area in Lagos state with her parents.

Her distraught mother who spoke with Punch said Esther had gone to the toilet to ease herself when she went missing.

“We went to the church together and I am one of the children’s teachers. As of 12.31pm, we were still together and I was cautioning her not to step on the child sleeping on the bed until someone called me and I left where she was.

“We were almost through with the second service and I was very busy because I was rounding off the programme. The other teachers told me that Esther said she wanted to urinate and a child of a church worker took her to the toilet. The girl was the one that used to help me with Esther whenever I was busy and Esther was already used to her.

“The girl said she placed my daughter on the potty and left her there when somebody sent her on an errand to buy pure water. When she returned from the errand, I asked after my daughter and she said when she checked her in the toilet, she was not there. Ever since then, we have been looking for Esther.

“We first reported the case at the Pen Cinema Police Station, and we have also gone to the Area ‘G’ Command and the Force Criminal Investigation and Intelligence Department, Alagbon. They promised to radio other stations, but they later said they had not heard anything about her.” she said

Confirming the incident, the Lagos state police command spokesperson, DSP Bala Elkana,  said an investigation into the matter was ongoing.

“We got the report and we have launched an investigation into the matter. We are making efforts to locate her whereabouts,” he stated.