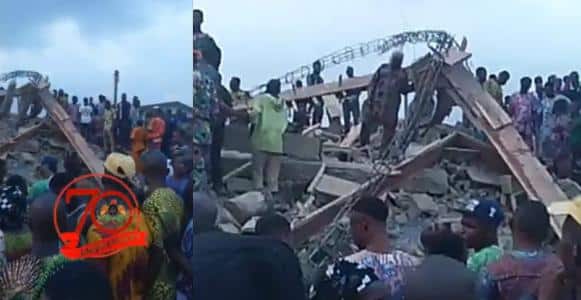 Tragedy struck again in Ibadan, the Oyo State capital, Friday evening, when a two-storey building collapsed at Sogoye, along Bode area of the ancient city, leaving an unspecified number of people trapped.

This is coming only two days after a three-storeyed building collapsed in Lagos State, killing 20 people, another building has collapsed at the Bode area of Ibadan, the Oyo State capital.

The incident happened exactly 5:50 pm at Sogoye, along the Idi Arere after the Molete overhead bridge, and as of the time of filing this report, people trapped in the rubbles are still begging for help as there was no equipment to rescue them.

The fire service personnel at the scene of the collapsed building were helpless, as there was no equipment to carry out the rescue operation.

However, findings showed that three people who sustained serious injuries have been pulled out of the debris.

An eyewitness account said the collapsed building was being developed for a commercial purpose and the construction was almost completed before the incident happened.

No casualty figure has been confirmed, but the information had it that construction workers were on the site when the incident happened.