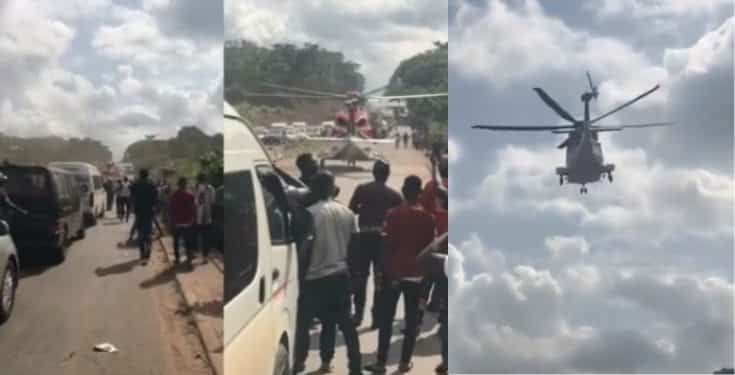 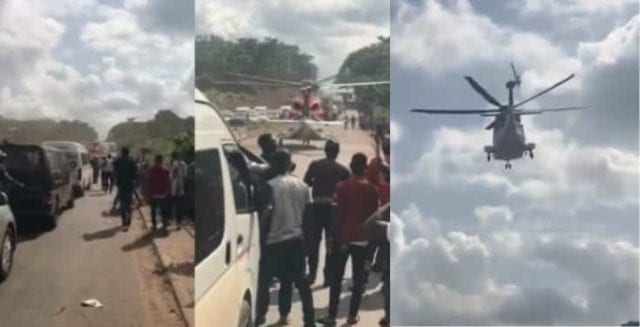 A Nigerian Billionaire who was stuck in traffic for over 2 hours on the Lagos-Benin express-way called an helicopter to come pick him up.

See some comments below;

adegudness: Question is how and when did they manage to create the space for the chopper to land in a standstill traffic 😂

rozjuly: Hustle hard make helicopter no be like oyinbo film for your eye.

gabriox3good: What Nigerians girls love. Show boating smh. What a Useless bunch. I hope it crashes and everyone in it dies. Now that would be a site to watch

segunilori: Make we no Dey glorify suffer. Landing that thing there is VERY dangerous moreover it slows the traffic even further. Why is the road not good so that everybody can happily go their way?

iamephie: It is better to spend the money on a helicopter than to pay it as ransom. Rich people think differently.🤣

tonwegift: Its either they take me along or i jump in too, we all die here, you cannot you traffic and tears to kill me.

canadavisaservice: Not everyone u see using a osinachi bus is broke. Some people are just very humble and u won’t even know they are billionaires or whatever. #moral of the story# be humble and be nice to people. “You have no idea who is sitting next to u even in a bus or mama put”

iamadunola: Hustle oo… make he no be say na you go they record who helicopter come pick for inside traffic ✊

olumide_babs: We have aviation laws in this country, but as with other laws, it’s not for the high and mighty, only the regular people 🤦🏽‍♂️ In saner climes, the fool would be spending some quality time behind bars 🚶🏽‍♂️

Related Topics:BillionaireNigerian Man
Up Next

Groom Falls While Dancing Zanku Legwork At His Wedding