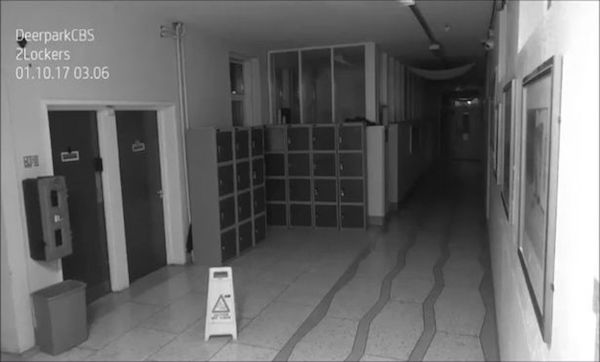 A CCTV camera installed at a secondary school appears to have caught some spooky goings-on in the corridors late at night.
Deerpark CBS in Cork, in the Republic of Ireland, released that footage which they reckon could show a ghost.
The footage begins with a huge bang and some strange flashes, that seem to be coming from behind a closed door.
Moments later, lockers begin to shake uncontrollably, reports the Irish Mirror .
The whole time, there is no indication that anyone has walked in or out of the corridor.
And things get really weird when a locker door flies open by itself, spilling books and papers onto the floor.
Just for good measure, at the end of the footage, the wet floor sign that has been placed outside the toilets is knocked over.
The footage appears to have been captured just after 3am on October 1, a Sunday morning when the school would have been closed for the weekend.
Posting on their Facebook page, Deerpark CBS said: “Anyone have the number for ghostbusters?”
They also said on Youtube: “Prank or poltergeist? CCTV footage from Deerpark CBS, the oldest (and most haunted!!!!?) school on the south side of Cork City.”
Whether or not it is actually a poltergeist or a prank by students is anyone’s guess.
They added: “We’re such a great school even the afterlife are signing up lol.”

See what Ghanian Mothers Were Caught Doing At Burial