A man identified as Samuel Meyiwa Khalil has taken to his Facebook to allege that Stephanie Idolor is a scam as he claimed she was not being truthful about her relationship with little Success family.

Stephanie Idolor was the lady behind the camera while Success was ranting after she was sent home from school over non-payment of school fees.

But on 24th March, Samuel Meyiwa Khalil, who visited Success’ mother to make findings on Stephanie’s allegation, revealed that he had gotten to the root of the matter and promised to feed the world with the gist. 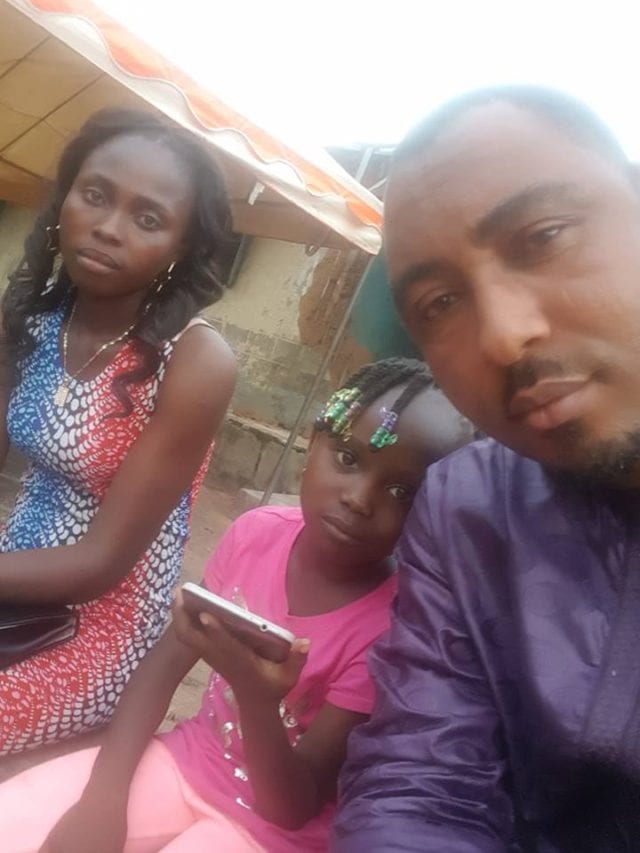 Just left Little Success and her mother; took time to ask her salient questions on her purported rift with Steph. Didn’t want to be part of those going to see them, but as a Sapele man, it is our duty to settle issues like this so Sapele wouldn’t be on the cyber space for wrong reasons…. Details Shortly…….. 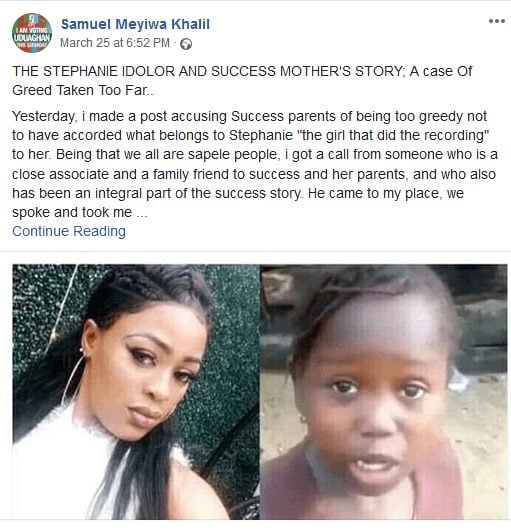 And just moments after the 1st post, he dropped the bombshell

THE STEPHANIE IDOLOR AND SUCCESS MOTHER’S STORY; A case Of Greed Taken Too Far..

Yesterday, i made a post accusing Success parents of being too greedy not to have accorded what belongs to Stephanie “the girl that did the recording” to her. Being that we all are sapele people, i got a call from someone who is a close associate and a family friend to success and her parents, and who also has been an integral part of the success story.

He came to my place, we spoke and took me to success mother. Unknowing to me that, Stephanie Idolor whom i was also agitiating for to be compensated had done a VIDEO with a Punch Reporter Theophilus Onojoghen who is also my very good friend, complaining to the world that she hadn’t gotten any financial gratification from success parents.

Narrating her ordeal, Mama Success said and i quote with whatsapp chat evidence, we have so far Given Stephanie #570,000, Stephanie only made the video to mock my daughter and myself, she wasn’t even the one that sent to instablog, it was her friend that resides in Asaba a Certain “Joyce Imofen” whom she sent it to, was the person responsible for the VIRAL VIDEO. THE INTRIGUING STORY

First, when Joyce posted the video on instagram ” Stephanie’s Friend in asaba” concerned Nigerians showed interest in supporting Little Success, and some requested Joyce account number, she gave, and the total money she received almost immediately was 70K, not knowing success parents, she called her friend, Stephanie to send her account number, which she did, she transferred the money so Steph could give it to Success mother, to her greatest Surprise, Steph Ate the money and gave success mother nothing. So, Joyce opted to speak with Sucess mother, because she had become the center of all eyes on instagram.

She got the account number from her friend and established relationship with Mama Success. Now, when Nigerians started appreciating success financially, Stephanie became angry and trouble ensued with success parents. She began to make outrageous demands that she had to ask Mama success to take her to ECO BANK BOYO ROAD, sapele where her account “Mama Success” is domiciled to go and check the account balance so they could give her her share.

Success mother being an ignorant woman took her there and discovered that about 700K had been paid, she withdrew 400K and gave to Stephanie, reason being that, steph had said the people involved were so much and she had had to settle everyone person involved.

This time, she took the 400K and didn’t give the girl “Joyce” who blew the video a KOBO. She kept making demands, that at a point, she went to ECO BANK to demand the statement of account of mama success but the bank refused; when she discovered that the bank wouldn’t oblige, she went to mama success took her to the bank and almost forced her to open a JOINT ACCOUNT with baby Success so she could control EVERYTHING that comes therein. When this didn’t work, she granted an interview with Punch accusing Success mother of not being appreciative.

At this point, she and her sister had gone to fight with Sucess mother and father demanding they open the joint account with success, but the parents refused, saying things they get was to take care of Success and not to be shared after giving you so much, that Chairman of sapele LOCAL Government advised her against it and promised to give Stephanie a job. Now my question is, Stephanie has been collecting so much from spirited Nigerians, she has not given a dime to Success, but wants to share everything that comes to success with her.

Deputy Speaker of DELTA STATE house of Assembly gave her 500K she didn’t give success a kobo, daddy Showkey raised funds for her, she didnt give Success a dine, but wants every part of success share. If this isnt GREED, what else is it? Ok! What is JOYCE share, the girl who took the video to instablog and other social media influencers? Nothing?!

I advise Nigerians to stop forthwith, Stephanie is a SCAM. If she argues, i will post all her WhatsApp chats with Joyce and Mama success and also Public Admin Alumi WhatsApp groups. I dare her to come and refute this Post…

CLICK HERE TO JOIN OUR EVER ACTIVE WHATSAPP GROUP
Related Topics:Stephanie Idolor
Up Next

Nigerian man narrates how his wife gave birth to an unknown