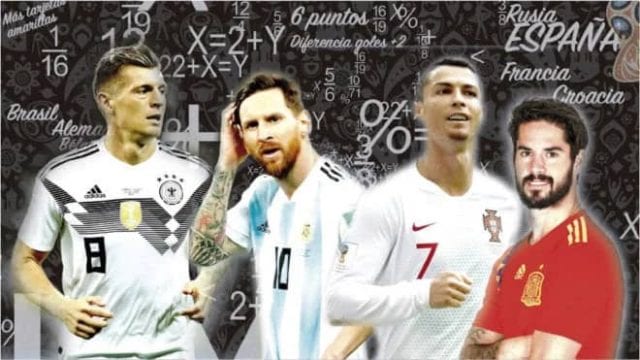 With one game left to play, the World Cup group stages will begin to be decided.

France, Mexico, Croatia, Russia, Uruguay, England and Belgium are already through to the Round of 16, though no side has first place guaranteed yet.

Here’s how the groups are looking ahead of the third and decisive game in each group:

With Saudi Arabia and Egypt eliminated, Uruguay and Russia will decide who comes top at 16:00 CET on Monday.

A draw will favour the hosts given their superior goal difference.

It will be the first group to be decided and as such, the two sides will not know who they will face until 22:00 CET when Group B will have played their final games.

What can be guessed is that Russia and Uruguay will be on the theoretically easier side of the draw, although they will have to beat Spain or Portugal in the Round of 16 to get there unless Iran spring a surprise.

Despite Spain and Portugal being in the lead when their fixtures kick off at 20:00 CET on Monday, they don’t know who will take top spot, and Iran are still in the fight.

If both win, they would tie, level on seven points and it would come down to goal difference, with that currently level too.

If one fails to win, either side could finish first, second or third.

Peru have already been knocked out and it looks probable that France and Denmark will progress with a two point lead for Didier Deschamps team.

A draw in that game would see both go through.

If the French side win and Australia beat Peru, there would be a draw on four points each between the Aussies and Denmark, taking the group to goal difference.

A lot of eyes are focused on this group with Lionel Messi’s Argentina facing elimination unless they beat Nigeria and Iceland fail to beat leaders Croatia, who could still drop to second if they don’t win.

The fixtures will take place at 20:00 CET on Tuesday.

Costa Rica have been eliminated but when Brazil face Serbia and Switzerland play Costa Rica at 20:00 on Wednesday, it will be for the top two spots in the group.

Any points for the Canarinha would see them progress but Switzerland could leapfrog them with a win if Serbia can hold the South Americans.

Mexico have already qualified but don’t yet have a companion, with all three sides able to join them.

There could be a three way tie between Germany, Sweden and South Korea, and for that to happen, Mexico must beat Sweden whilst South Korea would have to win against Germany.

Goal difference would then come into play.

Alongside Group A, it is the only group to have the two sides to go through decided before their games on Thursday at 20:00.

Currently, England lead due to a better disciplinary record.

Everything will depend on what happens in that clash, with a draw meaning it will come down to the number of cards shown to each team.

Poland are out but Japan, Senegal and Colombia are all fighting for a place in the next round.

Japan face Poland with Senegal and Colombia coming head to head on Thursday at 16:00.

Japan and Senegal can progress with a draw, but Colombia must win to keep their campaign alive.

Related Topics:sportsworld cup 2018
Up Next