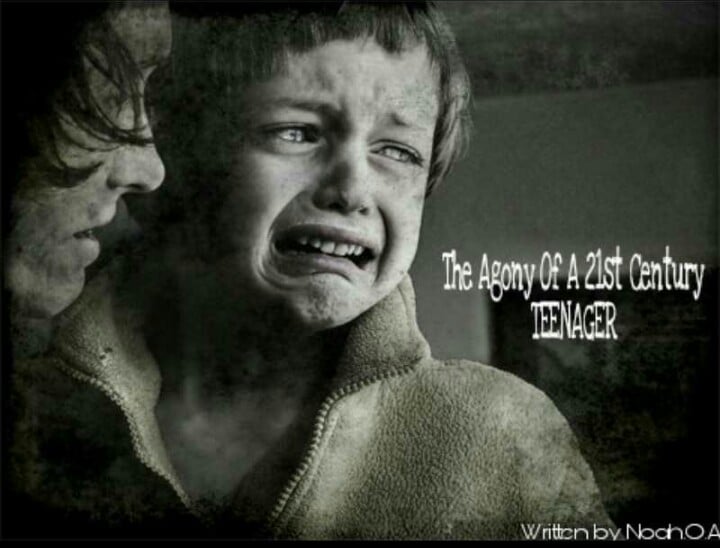 The writer of “The Journey” is here with another mouth watering story titled “The agony of a 21st century teenager”. The story no doubt sinks deeper than Atlantic oceans. So enjoy!!!

The agony of a 21st century teenager

Fred was as pained as usual, down with the guilt that always keep him off balance whenever he thinks of it. Yeah “Guilt” that was the word Fred had issue with. He was ready to spend his last penny to kill what he was addicted to and that was lying, stealing,lying, stealing, watching pornography, and having sex. “But how will I do it” is what he still asks himself.

One day he hopped out to church as he was expected of him to do as a Christian immediately he heard the word of God and had a rethink and gave his life to Jesus. He was born again but within some days he fell back to his addicted life, as the addiction came like a rushing wind and made him for into it. “What’s wrong?” He asked himself as he was confused on getting how to break that addiction he was into. Fear gripped his heart as he was taunted by his sin and battered by his wild thoughts. Immediately he heard a knock at his door. “Who is at the door?” He asked, then an answer came from outside the room. “It is me Angela, your girlfriend. Let me in” she said. Angela was pretty and goodlooking, she could kill guys with her looks and make guys go crazy for her. This was the exact thing that happen when Fred saw Angela, he forgot what he was thinking and immediately welcomed her with all pleasure treated her like a queen and as usual did the normal thing everything a newly couple will do on their honeymoon night. “Wow you are so good” she said to Fred who after the sex started thinking again and again and this time around he was having the option of committing suicide so that he can leave his guilt behind. In full speed he ran out of his room because he couldn’t hold it anymore.

As he began to run, he caught a glimpse of Christian faith gathering together to hear the word of God. Immediately he felt sober walked in and made a decision to follow Jesus and not only follow Jesus but also ask God to break the addiction of sin and also asked for the Holy Spirt to come into his life. Since then he became a free man doing signs for God.

Now you’ve seen from the life of Fred that he was once an addict who liked to:

– Steal
– Lie
– Keep unhealthy relationship with guys or girls
– Watch pornography
– Take Drugs
– Smoke
– Drink Alcohols e.t.c
And this are the agonies our 21st century teenager still face, but I have a Good news for you that there is a remedy for all that have been listed above as what we are addicted to.

Do you want to know?

Well I will tell you, the inly remedy is if you give your allow Jesus christ to take control of your life so that he can break those addiction that are listed above.

Then take a step of faith and believe just like what paul said in “Acts 16:31″ to the prison guard when he and silas got out of prison following the earthquake that shake the prison.

” Believe in the Lord Jesus Christ and you will be saved, you and your household”

So if you believe say this word of prayer!!!!!

“Dear Jesus, I want to accept you as my personal lord and saviour and my king, forgive me of all my sins knowingly and unknowingly. Be my helper in the need of help, protect me and welcome your Holy Spirt into my life. ‘IN JESUS NAME'(Amen!!)”

Now that you know the remedy, What should you do???

Yes it is important to note that there are some certain things we have to do when we give our life to christ, and this include;

N.b: Names in the story were based on real life story and are fictional.

Write-up Wednesday || The Journey Of Life (SHORT PIECE) By Fiyinfoluwa