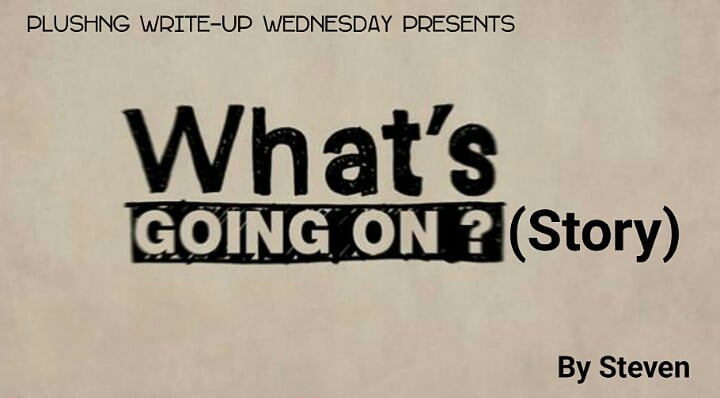 Marvin Gaye’s voice resonated softly in background as he stared down at the items on the table in front of him. Death in various forms stared back at him gleefully. To him, it seems like Death knows that he has won this round, and he revels in it. Gloating bastard!

…..There’s far too many of you dying
You know we’ve got to find a way
To bring some loving here today….

No way for him to find. Everyone that matters has died. Even he is just a living shell. He has died within.
He glanced once more at the table. The big kitchen knife, his machete, the pistol he was issued while still military service, and the liquid poison in the green bottle.
He was at the bridge earlier this morning. People were milling around like he had this big ‘suicide’ placard on. Every step he took to vault himself over the bridge railings was been monitored keenly. No one was taking chance since the TeeBliz incident.

….Picket lines and picket signs
Don’t punish me with brutality….

You already did! Brutalised i am!
He was assailed by the dark memories

He was just getting home when his neighbour rushed to him and told him that he saw both of his twin sons been accosted and interrogated by some crowd at Ikorodu.
It sounded incredulous at first. He was just arriving from his boys valedictory service where they had cleared the awards between them. They twin boys had progressed with their fellow graduates to their beach party while the school principal had delayed him for a tea meal. So how come his boys are at Ikorodu?
His neighbor was swearing on his life that he saw the boys with his eyes and he even had his glasses on.
Then like a sledge hammer, it hit him. His boys are on dreadlocks!

Theirs are the natural ones. The ones from birth. He hadn’t shaved them off on the advice of the white garment prophet and his wife’s insistence. Having lost two pregnancies before the twins, they weren’t willing to take chance.
He had planned on shaving them after their high school education. He drove like a maniac as he headed to Ikorodu leaving motorists, and pedestrians alike, spewing sulfurous curses in his wake.
“Not today, oh Lord, not my sons!” He prayed feverishly as he applied pressure on the accelerator. The car sped fast and furiously, as swift as an arrow.

Marvin Gaye’s silky voice floated up to him.
He has no tears left in him, his tear glands has dried up already.
What’s going on? Marvin Gaye seems to ask him.
The memories washed over him again.

He arrived there just in time to see two boys under a pile of tyres, while the irate mob screamed their defiance to the heavens. He looked at the boys faces desperately.
His knees sagged with relief.
Of course his boys could never be in this kind of spot. They are quite peace loving and full of life. They are on dreads, sure, but theirs is natural.
He reclined on a tree trunk as he watch the proceedings. The hyperexcited crowd howled wolfishly, screaming for blood.
Barbaric people. He mused to himself. What happened to the court of law? This is one of the reasons the country is not progressing.
Two police officers stood nearby munching greedily on roasted corns while washing it down with Chelsea dry gins.
Bastards! He spat! Another reason while the country is not progressing. Dumb law enforcers!
He couldn’t stomach it anymore as he watched the alleged Badoo cultists been set on fire, writhing with their pupils dilated with terror. He suddenly felt like throwing up. He shuffled his feet hastily. He had to get out of this hell ASAP!
No sooner had he moved towards his car than he heard another uproar down the street. The savage mobs surged towards the direction. Instinct told him to follow. It was a mad rush. They all sped down the alley, a cul-de-sac. And lo, his twins were before him, almost beaten to the point of deformation. And tyres were on them!

….Mother, Mother everybody thinks we’re wrong
Oh, but who are they to judge us
Simply because our hair is long
Oh, you know we’ve got to find a way
To bring some understanding here today…..

How so much Marvin Gaye speaks of his memories! No strength was left in him.
No tears to shed. Marvin Gaye keeps dragging down the cesspit of the dark memories. Like he wants him to live through it. But no! He is going to die through it. Reminiscing the memories is a mild form of torture for him.

He shoved blindly and wildly as he started towards his sons, his only crowbegotten kids! Hot tears threatened to blind him.
He was almost near them when he stumbled. He landed hard before his two sons. He reached out with a hand trying to make a contact. His sons looked up, hope brightening their faces as their eyes widen with recognition.
“Papa, save us!” They chorused. “We know nothing on what’s going on here.”
He stood up, his sons’ Messiah. No one was hearing him out, they were only focused on the two ‘criminals’ before them.
He started to protest, failed attempt! He was shoved and bundled off. His children’s cries for help succeeded him. His hands were tied!
Fire blazed up, dancing brighter and brighter. Until it was a conflagration of fire.
The mad barbarians howled their delight.
He screamed his desperation.
What’s going on? He was losing it!
What’s his sods’ offence? They were on dreadlocks!
The tears flowed as his life crumbled down in his presence.
He watched the stupid mass of savages, whose government has given them a target to vent their vexation and aggression on.
One stupid reporter was fumbling with his camera. He jumped on the reporter, tearing the camera from his grasp. He howled as he smashed the camera on the reporter’s head repeatedly. The terrified reporter scrambled away.
He saw the police officers still munching their stupid corns, laughing heartily.
Bastards! He leaped on the one closer to him, dealing him heavy blows. Something hit him hard on his back. He welcomed the resulting pain as he slugged the police officer heavily. His screams turned to cackles, mad cackles, as he saw blood staining his hands. The officer’s face was a pulpy mass of flesh. He screamed his satisfaction.
Something hit him heavily on his head. He howled his derision as he blanked out.

His life is desolated.
His wife has died. Had cardiac arrest upon hearing the news.
He is also dead as he is now. He is just a living shell.
Now he is going to be a dead shell.
Two seconds later, the knife was embedded to the hilt in his chest..
What’s going on?
Marvin Gaye’s voice fades out as his life trickles into oblivion.

Write-up Wednesday || The Adventure by Joseph N and Deji Adeloye