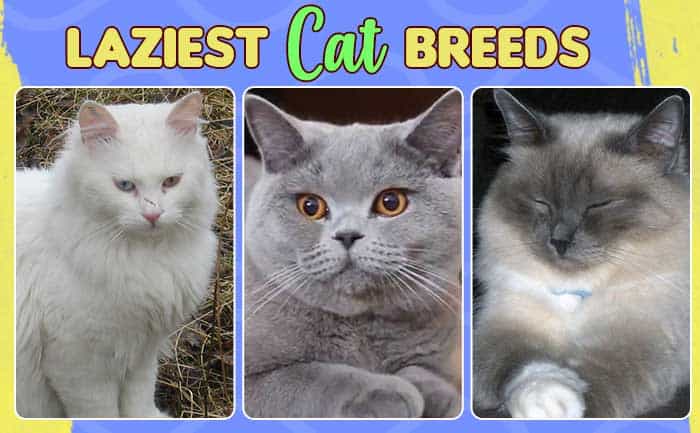 Are you a cat lover but also a dedicated couch potato? Would you love to have a laid back companion to couch surf with rather than a high energy feline who’s always getting into trouble? While individual cats vary a lot, there are some cat breeds that are predisposed to laziness as compared to their counterparts. So if you were wondering, here are 10 of the laziest cat breeds in the world that would love to sit with you through a Friends marathon.

10 Laziest Cat Breeds In The World Ragdolls are large, laid-back, semi-longhaired cats with captivating blue eyes. These cats are much more interested in humans than other cat breeds. This cat breed is bred to be affectionate and is easy to live with. Being one of the laziest cat breeds around, the Ragdoll loves to be cradled and cuddled by its owners.

The Ragdoll is often described as a docile cat breed but they will let you know when they want meals or petting. This cat breed can pick up tricks and behaviors easily with ample training. They love to be a part of family activities and will often greet their owners at the gates. They hate being alone though, so be sure to give your lazy cat a lot of love and often. Persians are calm, tranquil creatures that are not built for high energy. They are content to lie around the house purring and demanding a few pets at times. Persian cats are dignified and docile with a regal bearing. They are known for their quiet and sweet nature. However, this cat breed will require a fair amount of care as their long, luxurious coat needs a lot of brushing. Many owners have to brush their Persians twice a day to maintain a healthy coat.

While the Persians are relaxed and easy-going, they do not take kindly to being bothered by loud children, noises or pets. Though if you want to laze around in the afternoon with your feline companion, this is one of the laziest cat breeds you can find. Although, owning this cat can cost you upwards of $5,000! In fact, it is one of the most expensive cat breeds in the world. British Shorthair Cats are reserved with a quiet voice. They are not just the laziest but one of the most popular breeds around. While not quite as lazy as Ragdolls or Persians, these cats do prefer to lie around the house rather than venture outdoors.

The British Shorthair is an undemanding companion who does not get worked up easily. It is not the most affectionate cat breed but manages to get along with everyone. Their mellow nature allows them to get along well with other pets and children. The Selkirk Rex is a fairly new breed with Persian and British Shorthair ancestors. In addition to being one of the laziest cat breeds, it also happens to be one of the strongest. It is large in size with a muscular but slender body. If you love strong pets, our list of the strongest dog breeds might be just what you’re looking for.

The Selkirk Rex is tolerant and affectionate but might not be a lap cat. These cats have a sociable nature and do not like being left on their own devices for long. However, this cat breed loves to play with its owners and will be happy chasing flashlight beam around the house. The Ragamuffin is closely related to the Ragdoll. It was developed as a separate breed when breeders wanted to develop colors that simply weren’t allowed in the Ragdoll Standard of Points. Similar to the Ragdoll, Ragamuffins love hugs and sitting in their owner’s laps whenever the opportunity strikes.

They will follow their owners around and have a friendly disposition towards visitors and children. Ragamuffins are the laziest of cat breeds, content to lie around and cuddle. However, just like the Ragdoll, this cat breed hates being left alone. The Exotic is quite similar to the Persian cat breed except for its short coat. If you’d rather avoid the hassle of grooming the long coat of Persian but would still like a cat similar in disposition, the Exotic is what you’re looking for. Similar to Persians, these cats are sweet, docile and quiet. They are also quite lazy. In fact, these cats love nothing better than lazing around and being petted.

However, unlike the Persian cats, the Exotics can entertain themselves well and can be left alone for short amounts of time. Male Exotics are said to be of a sweeter disposition that the females who have been described as aloof. Maine Coon is a gentle giant of a cat that can adapt well to many different lifestyles and personalities. They like being with people and have the habit of following them around, but they aren’t needy. Maine Coons also love to talk can will mew back at you like it understood every word you just said. As these cats are highly intelligent, that is quite possible.

They love lazing around with their owners and prefer peace to noise. This beautiful cat breed is one the laziest and will not mind if you want to spend the day in bed. Just make sure there is enough space for your feline companion too. The Korat is believed to be a good luck charm in Thailand and was a popular gift back in the day. This cat breed is estimated to date around the 14th century based on their depiction in ancient literature. The name Korat comes from the region in northeast Thailand where the cats are thought to have originated.

The Korat is quite similar to the Russian Blue in looks as well as personality. They are home-loving cats that love to cuddle up and relax with their owners. These cats do not like loud noises or sudden movements and can be quite skittish. The Korat is best suited for a quiet household. The Russian Blue has a reputation as a gentle, quiet cat that is a bit shy. These cats are independent and aloof. They do not warm easily to strangers. However, with its trusted few this cat is loyal as well as amusing. It is not uncommon to see a Russian Blue following their owner through the house, sometimes even climbing on their shoulders.

Keep in mind though that this cat breed also quite sensitive and does not like being ignored. While they can manage on their own for a few hours, they expect you to pay attention to them when around. The Birman has a legend associated with it. It is said that this cat acquired its striking appearance when a blue-eyed goddess rewarded a cat’s love for its priest by turning his yellow eyes blue and giving him a striking appearance. The Birman is a beautiful cat with soulful eyes and snow-white paws. This cat loves to laze around and follow its owners.