Sam Raimi’s Doctor Strange in the Multiverse of Madness has come and gone. Prior to the Doctor Strange sequel, we saw Dr. Stephen Strange at the funeral of Tony Stark in the 2019 epic, Avengers: Endgame. It followed the epic battle that finally stopped Thanos and company from holding all of the Infinity Stones and basically laying carnage to the universe. It was part of a larger scene meant to put something of a punctuation point on the end of Marvel’s Phase Three. It officially ended with Spider-Man: Far From Home.

Now, having survived this intergalactic scourge, Strange and company had more stories to tell. There was the beginning to Marvel’s Phase 4 with Black Widow, followed by Shang-Chi and the Legend of the Ten Rings, Eternals, and Spider-Man: No Way Home.  Disney+ added to the mix with WandaVision, The Falcon and the Winter Soldier, and Loki. With Doctor Strange in the Multiverse of Madness, we got to see Benedict Cumberbatch’s Doctor Strange take on one of his most formidable opponents, Elizabeth Olsen’s Wanda Maximoff/Scarlet Witch in what turned out to be a box office smash hit.

DOCTOR STRANGE 2 EARNED $956 MILLION AT THE THE BOX OFFICE 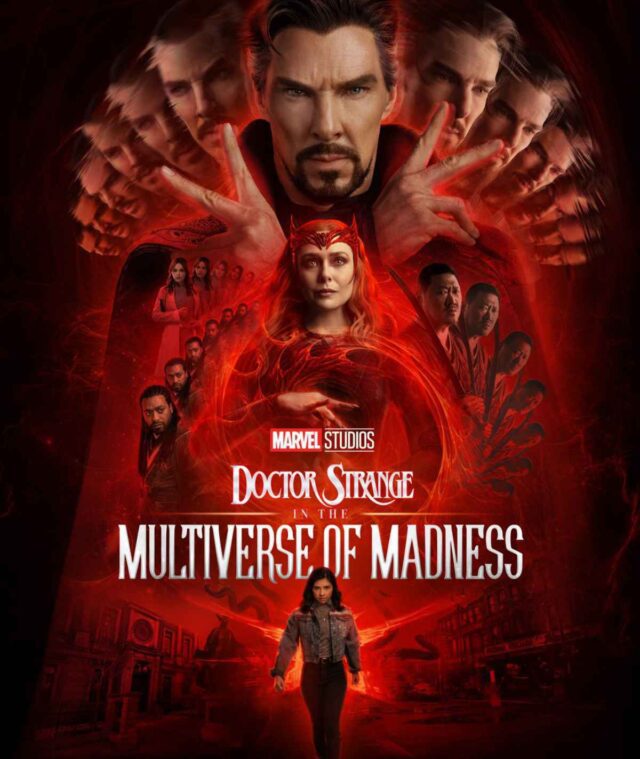 Disney and Marvel had high box office hopes for Doctor Strange in the Multiverse of Madness and it certainly didn’t disappoint. In fact, the Doctor Strange sequel rang in with an $187 million domestic opening weekend and combined with a $265 million take from overseas audiences, the Sam Raimi film brought in over $450 million in its initial weekend.

It was a great way to start the summer, as the film was released May 6, 2022, and immediately became Disney’s highest-grossing debut during the COVID pandemic. All in all, Doctor Strange in the Multiverse of Madness turned to have the 11th-best domestic debut in all of moviedom, falling in right behind the 2015 Marvel film, Avengers: Age of Ultron, which brought in $191.2 million on its opening weekend.

Now, we can fast forward through summer and see where the second helping of Doctor Strange sits at the box office in comparison to other popular Marvel films. With its box office run having concluded, the Benedict Cumberbatch-led film sits around $44 million short of the coveted $1 billion mark ($956 million in total). In the grand scheme of all that is Marvel box office dominance, this puts Doctor Strange in the Multiverse of Madness in 11th place of all Marvel superhero movies. It sits one spot ahead of the 2007 release of Spider-Man 3 (which also happened to be Sam Raimi’s final film in his Spider-Man trilogy) and one spot behind the 2019 Brie Larson Captain Marvel film, which brought in an impressive $1.12 billion.

When Sam Raimi was brought into the Marvel fold again, fans were expecting the familiar horror touch Raimi was known for and he didn’t disappoint. Offering many nods to his Evil Dead past, including the requisite cameo from longtime partner and Evil Dead mainstay, Bruce Campbell, the Doctor Strange sequel hit on all cylinders.

Let’s take a look back and see how Raimi and company brought in nearly one billion at the box office.

During the 2022 Super Bowl, a new trailer for Doctor Strange 2 premiered, designed to do exactly what it accomplished — get fans theorizing like wild. The new trailer was filled with more of everything — more action, more characters, and more hints at the different parts of Marvel’s Multiverse we’re bound to see in the upcoming sequel. We get what looks to be glimpses at a zombie version of Doctor Strange, some very Stark-looking robots, and some kind of clandestine council that may or may not be Marvel’s Illuminati. Perhaps most promisingly, a moment in the trailer featuring the unmistakable voice of Patrick Stewart — most likely as a variant of Professor X. The trailer had fans theorizing madly about Tom Cruise, Captain Marvel, the X-Men, and more. You can watch the trailer below.