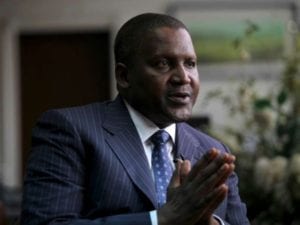 The high profile wedding ceremony of the daughter of the richest man in Africa – Aliko Dangote will be taking place at the prestigious Eko Hotel Convention Centre, Victoria Island, Lagos State very soon.

Fatima Dangote will be getting married to the first son of a former Inspector General of Police in Nigeria named Jamil Abubakar aka Jamboy.

However, lovers of alcohol will be forced to do away with drinks as such intoxicating contents will not be allowed.

It would be recalled that the Senate President Bukola Saraki also banned alcohol at the wedding ceremony of his daughter last year on the grounds of Islamic doctrines.

#BBNaija: Reno Omokri Reacts To Bambam And Teddy-A’s Sex In The Toilet

#BBNaija2018: Nina Says Love Has Made Her Lose Focus On The 45M Grand Prize