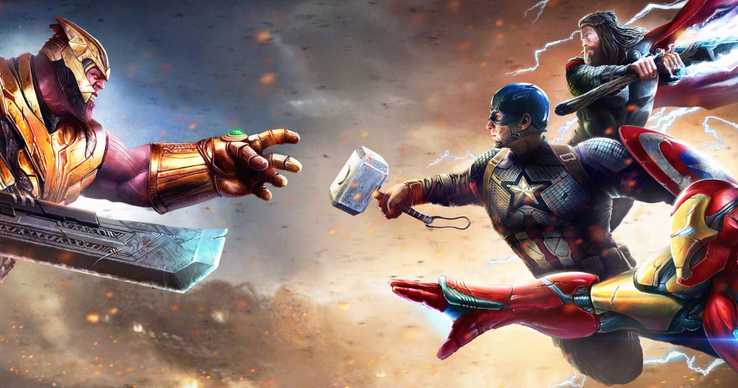 One of the more intense moments of Avengers: Endgame comes when Captain America takes on Thanos. It’s at this time Cap successfully wields Mjolnir and saves Thor’s life and seems to have the upper hand in the battle against The Mad Titan. However, things end up shifting when Marvel Cinematic Universe fans witnessed the unthinkable: Thanos was able to easily destroy Cap’s Vibranium shield. But how did this happen? The Russo Brothers, along with screenwriters Christopher Markus and Stephen McFeely shed some light on the subject.

During the commentary track for Endgame, which was just released on Blu-ray earlier this week, Stephen McFeely says, “You can also see that while Vibranium is the strongest substance on Earth, whatever Thanos’ straight razor there is made out of is stronger,” when watching the Thanos vs. Captain America scene. Joe Russo went on to explain how Thanos was able to destroy the Vibranium shield. He had this to say.

“Clearly Thanos is a thousand-year-old character who has fought everyone in the universe and is the greatest: He’s the Genghis Khan of the universe, so he would have the greatest weapon. He knows of Eitri, he’s been to Eitri to have his glove created. Did he have them create his blade as well? Potentially. But it’s interesting that it could destroy the shield.”

The Russo Brothers aren’t telling us what Thanos’ double-sided blade is made of, but it very well might have to do with Eitri and it might be something that is explained later on in the MCU, which has seen some pretty amazing and powerful villains over the years. With that being said, Thanos was most definitely the strongest foe so far after it took a time heist and an army to take him down this time around.

For people of Earth, Wakanda’s Vibranium will remain the toughest substance on the planet. But, there might be some more weapons like The Mad Titan’s blade coming up, especially with The Eternals movie on the way. While Marvel Studios boss Kevin Feige has revealed what will be in the MCU’s Phase 4, we’re still in the dark as to what specific stories will unfold over the next few years, which is exactly how Marvel Studios wants to keep it.

Endgame is enjoying some more success as a home release both digitally and on Blu-ray after becoming the highest-grossing movie of all time. Now that fans are able to watch the movie as many times as they want from the comfort of their own home, more questions are starting to pop up and the Russo Brothers will more than likely have some more answers in the coming weeks and years. For now, they’re stepping away from the MCU and moving on to other projects like Cherry, which will star MCU alum Tom Holland. You can check out the original interview with the Russo Brothers over at Comic Book.

The Eternals: First look at costumes of Angelina Jolie, Richard Madden and others revealed