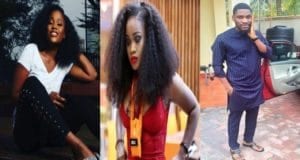 Big Brother 2018 housemate, Cee-c in a chat with fellow housemate revealed the only thing she wants from her former strategic partner, Tobl.

The relationship between the two, which was seen by fellow housemate and viewers as the strongest in the house, has suddenly gone sour and has been taken over by consistent quarrels. 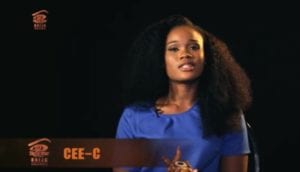 Saturday night, Tobi and Cee-c were filmed engaging in a serious argument calling each other different names. While Tobi accused Cee-c of touching his manhood without his consent, Cee-c said he was less than a man.

Chatting with fellow housemates afterwards, Cee-c said the only thing she wants from Tobi was for both of them to sit down and talk.

She told Alex and Leo, “All I want from him(Tobi) is for us to seat down, analyse the whole thing and tell ourselves the truth. Which is it that this thing won’t work again?

“I don’t know how I found myself in this situation. I can’t sleep because of Tobi. I’m thinking all the time.

“Not that the issues we are having are serious, do you understand? But the problem is just the way we handle them.”