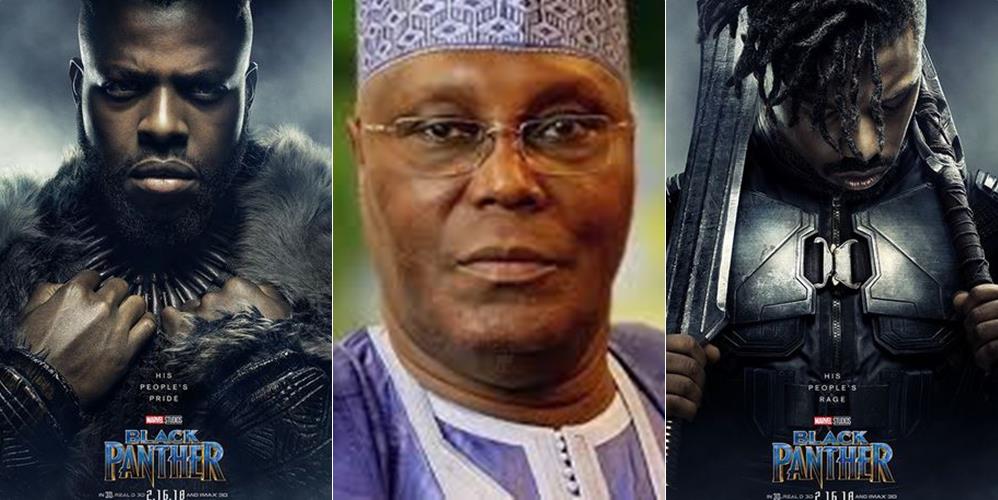 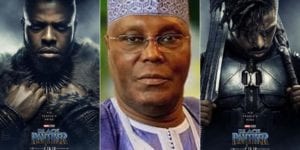 Former Nigerian vice-president Atiku Abubakar who saw the Black Panther movie recently with his kids has just penned an article on the lessons he learnt from watching the movie and how they can be applied in the real world.

Over the weekend, I joined my children to watch the much talked about ‘Black Panther’. It was a good film, and I was happy they took me to see it. However, I came out of the movie theatre a little upset.

When the first scenes came up, and I saw “Sambisa Forest” I was unhappy that the only reference the film makers could have for Nigeria was a negative one, but I was later encouraged by the thought of Africans solving African problems. That is a good thing, the kinds of things we used to do. For young people who may not remember, Nigerian civil servants and indeed most able citizens used to contribute money every month to support the struggle against Apartheid in South Africa. Nigeria was the single stabilizing force across West Africa. Helping to restore peace in Liberia and Sierra Leone are examples of the gigantic status we once had.

Seeing another African country come play ‘Big Brother’ to Nigeria made me very sad. We must return to a place of respect. We may argue that the film is a work of fiction, but there are many truths in the story?—?one of them being that young girls are being abducted by terrorists across the northeast of Nigeria, and they need to be rescued. Only recently, a band of terrorists stormed another girls’ school in Dapchi, Yobe State. After days of confusing information, it is now confirmed that 110 girls are missing. Nigeria has once again been thrown into sorrow with many of us wishing that there was indeed a ‘Black Panther’ to help rescue the girls. 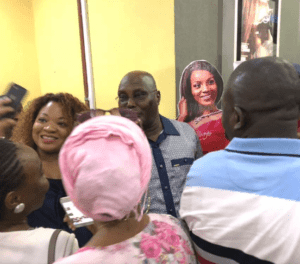 Here are my takeaways on Black Panther:

Wakanda was portrayed as a technological giant, which ruled by great kings, supported by a council, and traditions are held in high esteem. But it was easy to see that most of the decisions are those of the king, which presents serious institutional problems. Institutional order in the dispensation of justice could have helped handle the betrayal of Wakanda by the king’s brother, which would have prevented the hatred of Wakanda which filled the heart of the nephew who was left behind.

The succession system is also another example of institutional weakness in Wakanda. The young man from America came in and within days, destroyed the long standing institutions, even when he seemed to be trying to help Black people all over the world.

In one moment of folly, he decided to destroy the garden that guarantees powers to every other king of the future. Should there not have been a process whereby a council needs to approve the King’s orders before they are carried out? Institutions are better guarantors of good governance than kings or strong men/women.

Checks and balances are important in leadership. This is why democracy is important. As a Nigerian who has lived through many dictatorships, I would have liked Wakandans to adopt a new model, which gives them a say in who leads them, as well as includes checks and balances. This would at least insure the country against the rise of tyrants and demagogues.

The most successful tyrants always have simple philosophies, which on the surface appear good. We only see the deviousness of the plan after a second look.

Many people would be drawn to the message of black liberation that the young American returnee preached, but closer scrutiny reveals that it wasn’t liberation he was preaching, but reverse oppression. When the oppressed becomes the oppressor, has justice really been done or are we just exchanging one evil for another?
Nigeria’s hope is Nigerians

One of Wakanda’s most valuable resources was mentioned in the film, but not shown?—?many Wakandans abroad providing intelligence to their country back home. There’s enough Nigerian talent abroad to turn our country into a technology and industry giant. The question then is how we can make the environment conducive for them to return and contribute to its growth and development.

During my time in government, mining the ‘natural resource’ of Nigerians in the Diaspora was an important part of our strategy, bringing back Nigerians who had established themselves abroad to come home to work. Sadly, many of those people who came back have packed up and returned abroad. We are losing professionals in all sectors in their droves every month, at the fastest rate not seen since the 1980s.

We cannot build the Nigeria of our dreams without keeping our best people in the country and empowering them to work and build businesses. We cannot keep our people healthy when the best of our medical professionals are being forced to pack up and leave.
We always need strategic alliances

One of my favourite characters in the film was Mbaku, the big chief from the mountain tribe. He sounded and acted very Nigerian, which made me like him a lot. His alliance with T’Challa was very innocuous?—?having failed to defeat the new king in the challenge for the throne, the king encouraged him to give up, that he will be useful to the king in the future. That little moment is the reason Wakanda was saved later in the film.

As a Nigerian, I always wonder how much stronger our regional leadership would be if we built better alliances. Nigerian soldiers spent most of the 90s and 2000s helping stabilize West Africa. Wouldn’t it be in our interest to strengthen our influence on the basis of those sacrifices?

Women in Africa get things done

One important thing I noticed in Wakanda was the strong role of women in all aspects?—?defense, technology, leadership, spiritual leadership, among others.

When there was trouble, the women of Wakanda didn’t just stand by, they found a way. I remember in the mid-90s, when many of Nigeria’s leading democracy activists were running away in crates and bush border crossings, (I also miraculously escaped), the women were there to save us. Women were either helping the movement go underground, or taking up the fight. It would be a disservice to Nigerian women, if we speak about June 12, without mentioning the role of Kudirat Abiola. I was honoured to present a posthumous award to MKO Abiola’s family during the recently held Silverbird Man of the Year Awards, and I wish more awards will go to the women who often led or supported the pro-democracy movement.

I finished the Black Panther movie wondering how much better our country would be if we let more women into leadership. We are losing up to 40% of our productivity because we still haven’t fully integrated our women into economic and socio-political leadership.

But I was also left thinking, what if the king’s first child was a girl; would Wakandans support her to be Black Panther?

“I Was Once A Bus Comductor,Before I Ventured Into Comedy”- Comedian, Alibaba

Tonto Dikeh Reveals What She Loves Better Than Sex