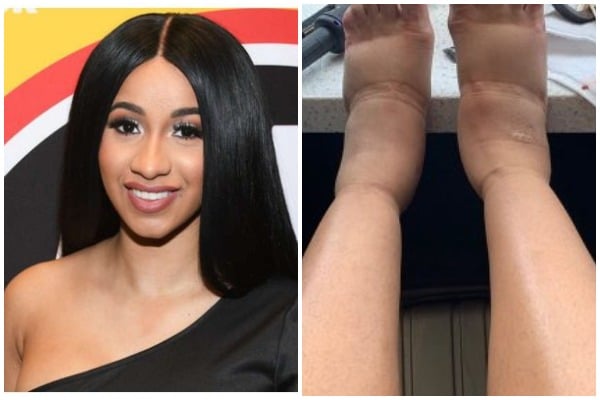 American Rapper, Cardi B took to Twitter on saturday to share a photo of how her feet get swollen each time she takes a plane.

Just as she is recovering from the aftermath of plastic surgeries.

The rapper posted the photo to show her fans evidence of her medical issues and why some of her shows were canceled.

She tweeted an eye-popping photo on Saturday of her massively swollen feet resting on what looked like a makeup table,

‘Look how swollen my feet get every time I take flights my stomach gets even more puffy,’ the Bronx-born celeb wrote above the photo.

‘Reasons why my doctor told me to chill on shows cause my feet and stomach burn when I get puffed up NOT due to ticket sales.Stop fakin s*** f*** outta here .’ 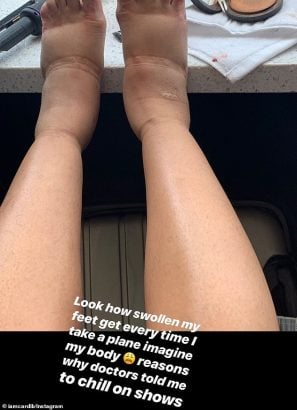 Upon canceling her shows at the end of her last month, she went live on Instagram and explained:

Later on Saturday, she uploaded a sizzling snapshot of herself in character as a stripper called Diamond in her upcoming film Hustlers, Daily Mail reports.

Her barely-there outfit, which included fishnets and platforms, allowed for a full view of her surgically enhanced derriere and sprawl of tattoos.

Y’all ready for DIAMOND to come to a theater near you this fall ? HUSTLER MOVIE !’ wrote Cardi, who features with Jennifer Lopez and Constance Wu in the film.

Hustlers is written and directed by Lorene Scafaria, who held the same positions on the 2012 dramedy Seeking A Friend For The End Of The World.

Lorene’s latest movie is based on a 2015 article for New York magazine called The Hustlers At Scores, written by Jessica Pressler.