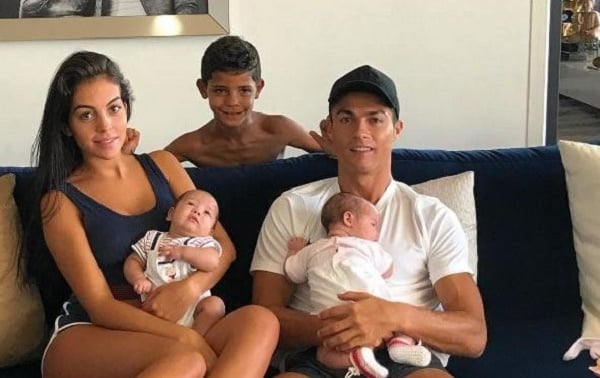 CRISTIANO RONALDO and girlfriend Georgina Rodriguez have announced their unborn baby will be called Alana Martina.

The Real Madrid superstar, 32, made the revelation in a live Instagram post, along with stunning model girlfriend Georgina Rodriguez.

And the Spanish model, 25, told viewer that the couple’s first child together is due in just 25 days.

The pair have been secretive about the pregnancy since rumour emerged they were expecting earlier this year.

But Ronaldo went live to his 113million Instagram followers on Friday evening to make the announcement.

The Portuguese forward and was joined by his two twin babies and Rodriguez in the clip, while his eldest son, Cristiano Jr, played football in the garden.

The former Manchester United star said: “I chose the first name and Gio the second.”

“The name of my daughter will be Alana Martina. I just wanted to share this with you. I think it is a beautiful name.”

This will be the Portuguese superstar’s first child not to be born by a surrogate mother.

Mateo cried throughout the live stream, and Ronaldo explained that it was just because he was hungry.