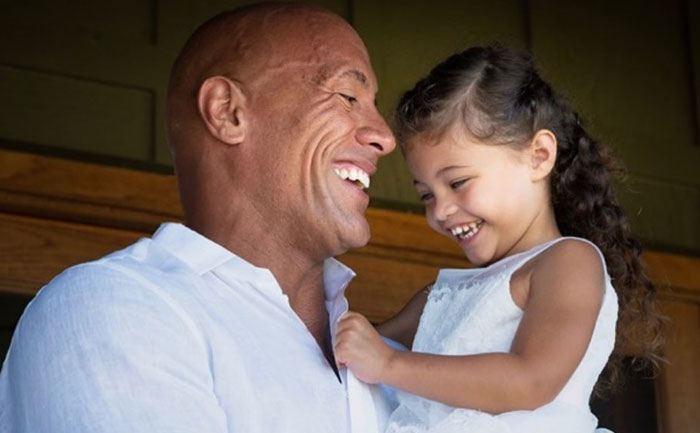 Hollywood hunk Dwayne Johnson is happy with the response of his latest release ‘Jumanji: The Next Level.’ Yes, the critically acclaimed movie has set the box office ringing, with incredible numbers. Johnson took to his social media handle and shared an adorable post. In the picture, he is seen celebrating the occasion with his cute daughter Jasmine Johnson.

“At least my dinosaur🦶🏽is respected. We told Jazzy this past weekend that daddy’s movie, JUMANJI was a big hit and she screamed “YAY let’s celebrate” so I said sure, baby..”

At least my dinosaur🦶🏽is respected. We told Jazzy this past weekend that daddy’s movie, JUMANJI was a big hit and she screamed “YAY let’s celebrate” so I said sure, baby.. cake? cookies? ice creeeeaaam? she said, “no daddy sit on the floor” and then proceeded to remind me that “celebrating” means embarrassing the 💩 out of me. But I’d gladly trade it all for this level of four year old joy. #ChickenSoupForTheSoul #VinegarForTheEgo #JazzyJumanjiCelebration 😂♥️

In the picture, we can see Dwayne Johnson lying on the floor. While his daughter was throwing some soft toys such as a tiger and an elephant on him. The father-daughter duo looks adorable, celebrating Jumanji’s milestone.

Dwayne Johnson has tied the knot with his longtime girlfriend, Lauren Hashian, in Hawaii in August 2019. The couple is parents to two daughters. The family man that Dwayne is, he keeps posting pictures of his daughters on social media regularly.

The Rock had an adorable heart melting birthday wish for his little princess on her 4th birthday. He wrote, “Can’t promise I’ll be here for the rest of your life, but you have my word I’ll love and take care of you for the rest of mine. Happy 4th Birthday, my Jazzy ♥️And thank God you got your mama’s good looks.

Can’t promise I’ll be here for the rest of your life, but you have my word I’ll love and take care of you for the rest of mine. Happy 4th Birthday, my Jazzy ♥️ And thank God you got your mama’s good looks. #therestofmine #birthdaygirl #daddyshands

This cute picture will touch your heart for sure

On the work front, Dwayne Johnson will be next seen in Disney’s ‘Jungle Cruise.’ The film is expected to release in July 2020. He will also be seen in Netflix’s Red Notice. The Rock will also be starring in DC’s Black Adam. The film is based on the role he played in the 2019 superhero film, Shazam! The film is slated for a late 2021 release.