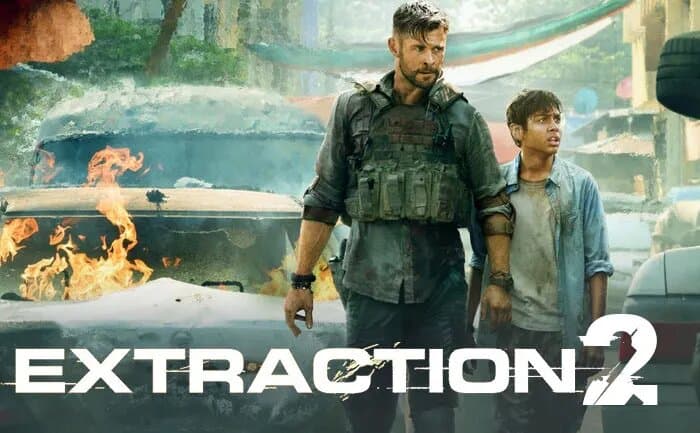 Extraction produced by Russo brothers has already caught everyone’s eye. The action thriller directed by Sam Hargrave has a strong storyline and amazing performances by the cast. The movie is garnering much love from fans and critics alike. Extraction showcases Chris Hemsworth as a mercenary Tyler Rake who undertakes a dangerous mission to rescue the son of India’s biggest drug lord from Bangladesh’s biggest drug lord.

Netflix users are, however, wondering about the end scene of the movie and discussing that ambiguous ending. The ending leaves viewers unclear of whether or not Tyler survived. He was fatally wounded during the final battle.  After he’s shot in the neck, we see Tyler fall off the bridge and into the river below. Yet, eight months later, we see someone watching Ovi (Rudhraksh Jaiswal) was it Tyler or just a figment of Ovi’s imagination? But the ending has made way for a sequel of the hit flick.

Here is everything you should know about Extraction 2:

Extraction 2 Hasn’t Been Announced Yet:

The makers have not given any official confirmation of a sequel to the Chris Hemsworth starrer. But Sam Hargrave did tell Digital Spy that there have been discussions of possible a possible follow-up to Extraction depending on how viewers respond. With the movie being loved by fans we are wondering when the makers will announce the sequel.

If Extraction 2 is put into active development by Netflix, it will take a couple of years before it releases. Being an action movie it will require a bigger budget, more time in pre-production, and more VFX work in post-production. Moreover, Hemsworth is busy with Thor: Love and Thunder and Guardians of the Galaxy Vol. 3. Extraction 2 will not be seen before 2023 at the very earliest, probably later.

If Extraction 2 is made, it won’t necessarily be the continuation of the story in the first part. The plot can be different from what we saw in Extraction. Extraction 2 could move forward with Tyler Rake on a new mission either to save someone – or kill someone. The sequel could even be set in Ciudad del Este, Paraguay, where the original graphic novel took place. Or with a time jump, Ovi might be seen as the protagonist of the story.

As we have just seen Extraction and there as been no official confirmation of a sequel by the makers. Here is the trailer of Extraction for fans to view.

As per wegotthiscovered.com, Rumours abound that Chris Evans is being eyed for a role in Extraction 2. The Russo brothers and Netflix want the Captain America star in the sequel as another agent that works together with Hemsworth’s Rake to take down an evil dictator. If they can’t get Evans, they’ll likely go for another MCU star, such as Chris Pratt.

Scarlett Johansson Reveals She Was The Second Choice For Black Widow