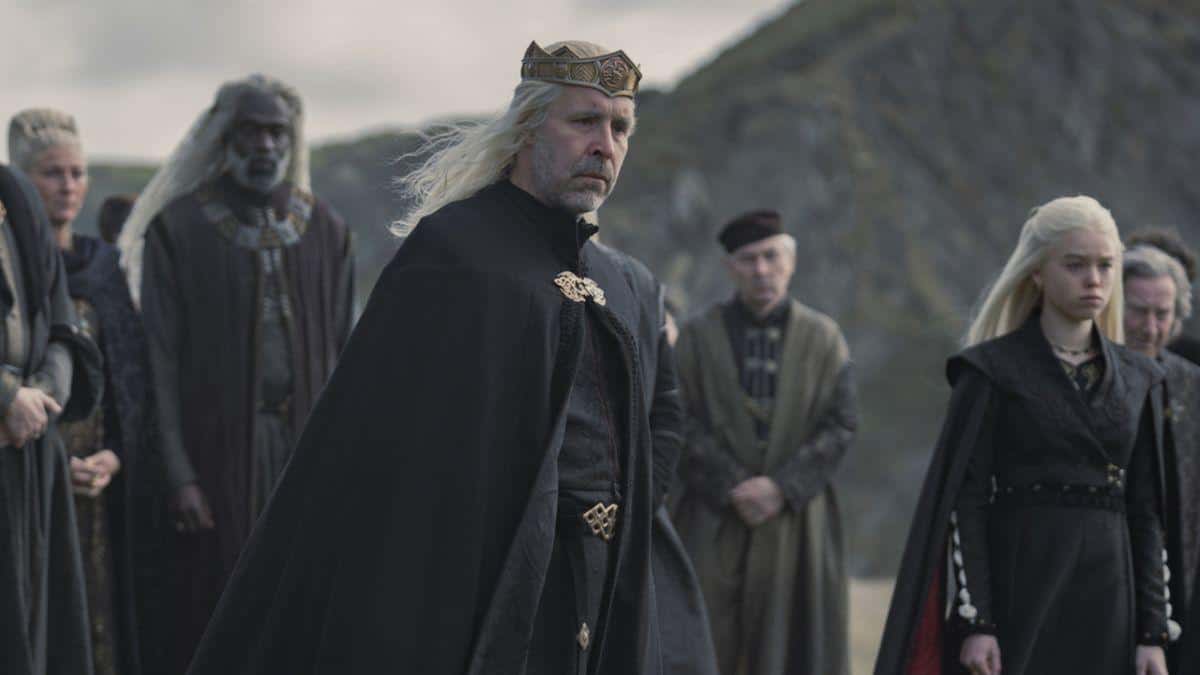 Following a post production mishap during the third episode of House of the Dragon, HBO has announced that they’ll be fixing the blunder. According to Variety, the network is already in the process of rectifying the mistake in which viewers, specifically including one who took to Twitter, pointed out shortly after the episode aired. The error in question saw leading actor Paddy Considine’s character King Viserys with two brightly colored green fingers instead of the wound presumed to be taking the place of the lost digits.

During the debut episode of House of the Dragon, audiences watched and listened as Viserys spoke of his wounds from sitting on the Iron Throne, which is crafted from a number of swords. During the second episode, the King’s pinky finger is sliced open, leading the maesters to use maggots in order to allow the King to hold on to what flesh is left. The accident during the episode in question was presumably meant to instead reveal the fate of Viserys’ fingers, but instead gave us a semi behind-the-scenes look into how the magic is made. With so many VFX and CGI moments, they can’t win ‘em all, folks!

Fans of the Game of Thrones universe will know that the House of the Dragon mixup is hardly the first time production hasn’t noticed a glaring error before releasing an episode. Hopping in a time machine and traveling back to the pre-COVID era of 2019, Game of Thrones fans will remember a much talked about scene in Season 8 Episode 4 in which a certain Seattle coffee chain’s takeout cup can be seen clear as day. The moment (or plug!) happened when Daenerys Targaryen (Emilia Clarke) was seated with a piping hot cup o’ joe from Starbucks, placed right in front of her. While it only appeared for a second or two, Thrones fans have some of the best eyes in the fandom biz, quickly spotting and pointing it out, blowing up the spot of whomever was to be on top of it.

Premiering just a few weeks ago, House of the Dragon has been on an absolute rampage, setting fire to records, traumatizing viewers, and giving other shows a run for their money. The Game of Thrones prequel takes fans back 200 years before Ned Stark (Sean Bean) took the King’s Road to King’s Landing and became King Robert Baratheon’s (Mark Addy) Hand, which in turn kicked off a chain of events that would see massive amounts of bloodshed. Based on George R.R. Martin’s novel Fire & Blood, the new series focuses its lens on House Targaryen. Using their dragons to rain down fire upon their opposition, the house holds the rule of the Iron Throne in King’s Landing’s Red Keep. But, just as always in the brutal world of Westeros, there are powers on the horizon looking to claim the glory – and crown – as their own.

Getting their first “uh-oh” moment out of the way, it’s no doubt that the crew behind House of the Dragon is now pouring over the series shot-by-shot to be sure nothing else slipped through the cracks. With CGI and VFX elements out the wazoo, we’re thinking we can give them a pass on this one.

Pixar Making A Sequel To Its Best Movie

Marvel Is Going To Have A Harder Time Keeping Its Secrets