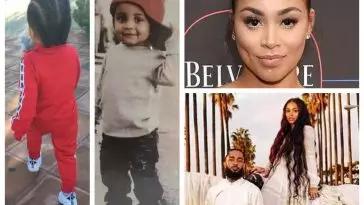 London’s first child and son is Kameron and he is nine years old. London had Kameron with her ex-boyfriend, rapper Lil Wayne.

Her second child and son is Kross and he is two years old. London had Kross with her boyfriend Nipsey Hussle before his tragic death on March 31st, 2019.

On March 31, 33-year-old Nipsey Hussle was shot multiple times outside of his clothing store, The Marathon Clothing, in the Hyde Park neighborhood of Los Angeles. Nipsey was rushed to the hospital where he was pronounced dead.

Since Nipsey’s death, London has not released a statement of any kind.

How many kids does Nipsey Hussle have?

Before his death, Nipsey Hussle had two children – a son and a daughter named Kross and Emani.

Nipsey’s first child is Emani and she is 7 years old. Nipsey had Emani with his ex Tanisha Asghedom.

Nipsey’s second child is Kross and he was two years old before his father’s tragic murder. Nipsey had Kross with his girlfriend Lauren London.

Does Lauren London have a baby with Nipsey?

Yes, Lauren London had a baby with Nipsey and the baby’s name is Kross Asghedom. He is two years old.

London and Hussle started dating in 2013. Three years later in 2016, London found out that she was pregnant.

Hussle told GQ Magazine earlier this year that London had just nailed a role in Snowfall but ended up having to pass on it because she was pregnant with his child:

“Lauren was handpicked by John Singleton to do Snowfall. She read, got the part, shot the pilot…did stunts…this was her dream role. And then she got pregnant with our son. That was a really hard decision for her to make.

“I didn’t put any pressure on her for whatever decision she wanted to make. I learned then that what she believes in, she really believes in,” Hussle said.

London also does her absolute best to keep her children off social media, out of the public eye. She rarely shares photos of her sons on Instagram. The few times she shared pictures of her son with Nipsey, Lauren made sure she didn’t share angles that showed her baby’s face.

There were rumours that Lauren London and Nipsey Hussle were engaged before his death. But as far as the public knows, London and Hussle were not married although they were extremely close and very much in love,

London was however previously engaged to Lil Wayne. The two split in early 2009, just months before their son was born. Despite no longer being together, London and Wayne are both on the same page when it comes to raising their son.