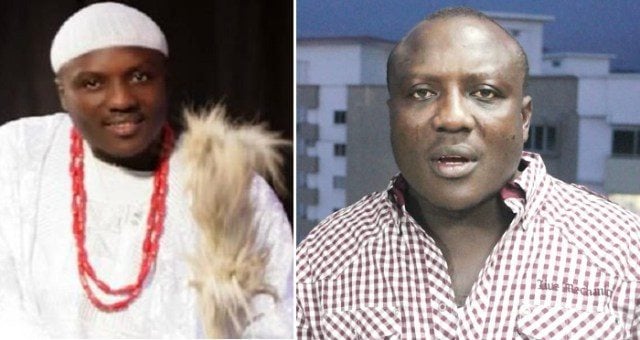 Popular Fuji musician, Akorede Babatunde Okunola aka King Saheed Osupa has in a recent interview revealed that he is back in school for his Political Science degree course at the University of Ibadan.

The actor, scriptwriter and movie producer whose first appearance was in “Omo Ori Eni” has over 30 albums to his credit after moving into stardom with his “Master Busters” song.

In a recent interview with City People’s reporter, NIFE KAZEEM, who paid him a visit at his Ibadan home, He disclosed the reason why he is back in school for his Political Science degree course at the University of Ibadan.

What led you into Fuji music?

I was so much loved by my parents. Let me say I was the best child of my mum. To be honest, I was a spoilt brat. They didn’t scold me, whatever I said I wanted, they wouldn’t argue with me. They always gave me whatever I wanted. Because, I really disturbed my mum through childbirth, so she believed if anyone should beat me, I would die.

(Laughs) So, I just decided one day and told them that I wanted to be a fuji music singer, they said they wanted me to study.

People think you’re the most aggressive among your contemporaries?

It’s cool, but one thing is clear to those who know me very well. This act that I am wearing, it is Fuji that shaped me into it. I am just trying to meet up with their act, to make it real.

I heard that you’ve gone back for your degree programme?

Yes, I really need to because that is my late parents’ wish.

And what are you studying?

Are you planning on becoming a politician?

Not really! I just want to be a political theorists because I’m still going to obtain my Master’s degree in Political Science.

Are you dreaming of contesting for any post in future?

I’m not, I just want to make correction to some mistakes through my column, on social media. And to be a role model to some boys that I trained.

To become successful in life it is only God ‘s doing because everything depends on your destiny. I can only try my best as a human being.

Yes and blessed with kids. They are all in the States.

Do you have any issues with anyone in the industry?

Not at all. But I don’t know if anyone has any with me. In my case, music is just the smallest part of my vision, because I believe I can still do more beyond music. But I am not leaving music, because it is part of me.

The major reason I went back to school is to obtain my degree in Political Science, I believe I can still make an impact on the society one way or the other.

There is this axion that says. Dogs and monkeys are not contemporaries. Simply because I find myself in the same bracket with some people does not mean we must reason alike, as for me, I still have a very long way to go.

You being a Political Science Student, what can you say about the present crisis in Ibadan?

Nigerians should pray for our leaders and God bless Nigeria my country. In Oyo State now, there’s something we call “Pandemonium” a royal rumble thing in bracket.

What they say is that the authorities in the state are bastardising the culture of Ibadanland and those in power say the king should dance to their tune, which is not in the history of Yorubaland at all.

No one messes with the power or orders of the King. And we have what is called Convention, which is part of the culture, the normal way of doing things right in Yorubaland.

There’s something we call “Ipebi” in Yorubaland. For someone to become a king, you have to go to “Ipebi”, For the preparation of the new role. I don’t think there is something like that again in Ibadan.

The authorities believed they could just pick or call anybody, without going through the normal traditional rites and rituals and make him an Oba..

These days, the new kings, are crowned in the office of the Governor.

Is this forbidden in Yorubaland?

The culture of Yorubaland forbids the act of just picking someone from any where to become king. You can not just say these are the new kings and start giving them crowns. I called that bastard culture. Constitution of a state must include part of the culture. Just to suite the people.

Going against the culture that has been in place for many years is inappropriate and bastardising the culture.

I personally, disagree with the Governor.

In my findings, I was told that people in power did that just because they believe that the refusal of Olubadan to comply with the wish of the authorities called Progress Kind of Change is against their interest, which Ibadan people called retrogressive.

So, they now say the refusal of the Olubadan to comply with the step the authorities took was at the behest of those who are in Politics. The governor believes it is the politicians around Baba who are dictating to Olubadan, believing that they are the ones telling him not to obey him.

And why is Olubadan not willing to obey? Is it because it is against culture and tradition?

There is this theory in Political Science we call Dualistic Theory of Democratic State.

And it says that we should find a way of bringing together the two. Bring forth a perfect representation of the people.

People know you have the power. But you don’t need to parade your power and say I have the power to do this or that or do whatever I wish to do. After all, the cases are in court and till ‘Kingdom come they might not win the case.

What is your advice for the people of Ibadan?

Just to keep their fingers crossed because there’s nothing they can do about the situation of things now. They can not challenge the authorities in power now.

But what is going on at the moment is absolutely wrong.

Why don’t you advise them and share your own views with both sides?

Because I’m still a young boy. We can’t talk about what’s happening among the elders.
What do you expect me to say in this kind of situation than to just hope for the best.

Asahd Gets A Diamond-Encrusted Watch From DJ Khaled