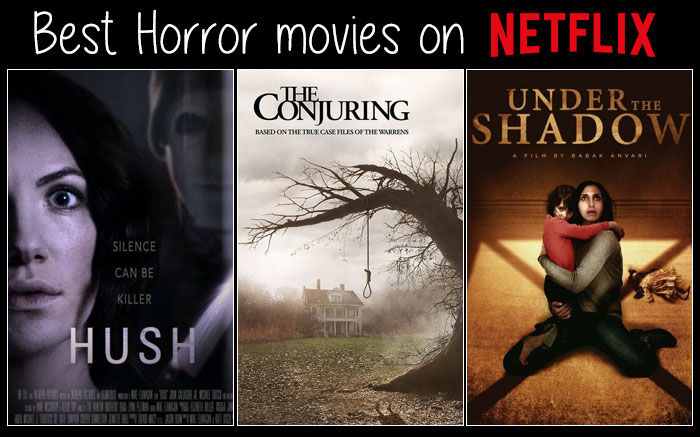 There is no definite time required to watch a horror movie on Netflix. However, when October is here it is the best time to watch horror movies. Gone are old days to enjoy Halloween. Now, is the time to get all your thrill and goosebumps, your tricks and treats streaming movies on Netflix. Halloween is near and here we present you the top 10 best scary movies streaming on Netflix today that you can enjoy and have a good time.

This horror movie was released back in 2010. It was a huge box office success earning 9.7 million USD. The film was directed by James Wan. The first part of the film series Insidious. The storyline goes this way that a family tries to save their son who falls into a coma after an incident in the attic. Now, they can only get back their son by witnessing paranormal experiences.

“the crowning achievement of James Wan‘s fascinating filmmaking career thus far, Insidious packs on its roaming, fluid shots with endless amounts of tension and bursts of nightmarish nonsense. It’s one of those rare ghost tales that use color with almost percussive attention, most notably in the bright red streaks of the man with the long, sharp nails…” Chris Cabin wrote in Collider.

The film is set in South Korea where a zombie virus breaks out on the train. A father takes his daughter Soo-Ahn to board a train KTX from Seoul to Busan. It is during the journey that the catastrophe takes place where most of the earth’s people turn into flesh-craving zombies. Though the KTX  is running towards Busan, it is the passenger’s life at risk who fight for their families and against zombies and one another. The concept of the film as intriguing as the storyline sounds ‘Zombies on a train’.

A mother and daughter struggle their lives and suffer in the war-torn Tehran of the 1980s when a menacing evil begins to haunt their lives. Directed and written by Babak Anvari. This film is the story of suppressed spirits and politically beguiling tale of angry spirits. The mother and daughter have to witness the supernatural, mysterious events unveiling before them and face them. The film has had 19 nominations and won 1 BAFTA film award. Don’t you think this could be your best take on a horror film? Go for this as well.

The story of the film revolves around Wilfred James a proud farmer who murders his wife with the assistance of his unwilling teenage son.  He succeeds in gaining the ownership of her inherited land. But things don’t go down well as strange events unfold and take place in James’ life and his farm. It is a slow but scary movie that will test your patience all the while in the film until the twist began to take place. The film directed by Zak Hilditch and co-written with Stephen King is one horror movie to put in your wish list and watch out for.

Belonging to mystery, horror genre. The Witch is one batshit crazy movie to watch out for. The setting of the story is in New England in the year 1630. The storyline of this horror movie is that Katherine and William make efforts to lead a dedicated Christian life. They have five children. However, when their newborn son disappears and their crops ruin, the family turns on one another as a result. It is an in-depth history of a family unveiling their sins making them becoming prey to evil. The director of this film is Robert Eggers. It is one of the scariest, spine-chilling movies to watch. The portrayal of the witch in the film is not a typical witch going crazy over toads, she is far more sinister than you can imagine.

The ritual is a story of a group of college friends who come together for a trip to the forest but they encounter a fearsome presence from the woods that’s stalking all of them. It is a horror, mystery and thriller genre. The director of the film is David Bruckner. plus point? Available on Netflix. It is by far the creepiest film to watch. It will keep you on tenterhooks for a long time. Not one of the typical horror movies that you might usually watch. The movies are all about mystery and dread. It’s one kind of movie that may sound promising to you.

The storyline of the film is extremely unusual yet enticing enough to watch out for. A deaf and mute writer goes to live in the remote woods where a masked killer appears at her window. Now she must fight for her life silently. Seems exciting enough to get popcorn? Then, go for this best movie for Halloween night. Directed by Mike Flanagan. Released in 2016, this is one home-invasion thriller that will give you the creeps you hadn’t expected at all.

Released in 2013 this movie was one of the horror movies that made everyone run to the theatres just because of its popularity and success. Not for the weak- heart. Don’t watch this movie alone. It could leave you hiding your face behind the pillow or make you bite your nails in suspense and mystery of what terrifying could happen next.

The movie is based on real-life paranormal investigators. The two investigators Ed and Lorraine waren are called upon by Carolyn whose farmhouse is witnessing disturbing paranormal events. It’s up to the investigators to defeat the evil menacing presence in the house that is creating havoc in the family’s life. James Wan is the director of this classic scary film. He had already given hits such as SAW that was released in 2004 and then again in Insidious in 2010. The Conjuring could be the best film to give you the much-needed scares and easy to stream on Netflix.

The movie is Stephen King’s novel adaptation. Directed by Mike Flanagan. Flanagan has had his list of horror hits and this is one hell of a spooky scary film to watch. A fun, harmless game between a married couple becomes a fight for Survival for Jessie, Gerald’s wife. It is the events unfolding after her husband’s sudden death that may terrify you the most. The events unfold showing scenes of Jessie’s past life hidden somewhere in her mind and the possible lurking presence in the house. One of the best psychological horror.

Just because the movie is drama, mystery, thriller, doesn’t mean it that it doesn’t have the essence of horror at all. Directed and written by M. Night Shyamalan. This is one best movie that will thrill you to the core. Malcom, a child psychologist receives an award on the night when he is paid a visit by a sad, upset ex-patient. As the incident passes, Malcom decides to help a young boy with similar ills like the previous patient. The problem of the boy is that he sees dead people which by the way also is the famous tagline of the film. “I see dead people.”

These are the top 10 best horror movies streaming on Netflix. This list of horror movies will be updated every week and it was last updated on 6th October 2019.