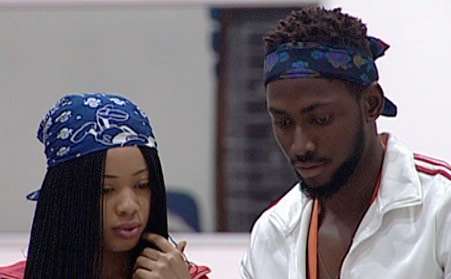 We all know that yesterday was Big Brother Naija housemate, Miracle’s birthday and in what could be considered as a birthday gift to him, Nina offered him sex as the duo was captured in bed together in a rather sexual move.

Earlier before then, Khloe had on her own part decided to give the birthday boy a dry humping yesterday while he squeezed her bum in the process.

They both seemed to care less about the other housemates of the Big Brother Naija show walking past them and as seen in the video, they were both engrossed in the act.

The housemates, after their Saturday Night party appeared to high having so much to drink at the party, and they went on to do a kissing game.

Teddy and BamBam kissed. Miracle, the birthday boy, and his pair, Nina kissed. Ahneeka refused to kiss Rico, Alex refused to kiss Alex, but the most dramatic part of the night was when everyone had retreated to their rooms.

In the video, Miracle and Nina were seen kissing initially on the bed before they eventually got don with each other. Miracle then lied right behind Nina while her back was turned on him with her face turned away.

In the video, it appeared that Miracle was trying to adjust himself right behind her and was making some kind of funny gestures that indicated someone was trying to have sex and getting emotional about it.

Nina on the other hand, looked relaxed at the onset, but it seemed the more the guy was penetrating from behind, he began to feel unease and was seen in the video trying to take in the pains and emotions of the act.

The house is getting hotter by the day and this is just what the viewers have been expecting as typical of the Big Brother Naija show.

#BBNaija Miracle and Nina's unscripted "one corner"😂😂😂😂
The commentator just killed everything 😂😂😂😂😂😂😂😂😂😂😂😂😂😂😂 pic.twitter.com/ptwpq3dv3m