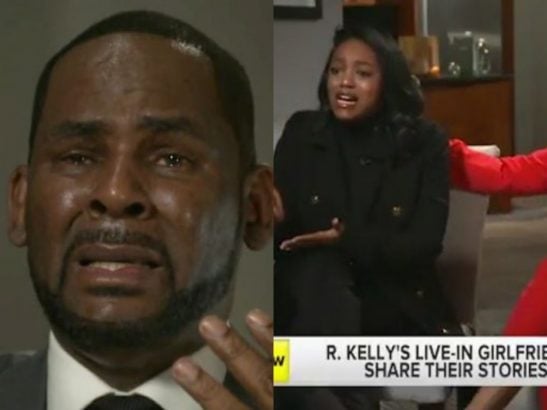 R Kelly’s girlfriends have defended him against their parents whom they accuse of lying in order to make money from the 52-year old singer.

The girlfriends, Azriel Clary and Jocelyn Savage, made this known in an interview with Gayle King on CBS News.

“What is your relationship, both of you, with R. Kelly?” King asked.

“We’re with him, that’s our relationship,” Clary said.

“We live with him, and we’re in a relationship with him, we just said it,” Clary said.

“Both of you?” King asked.
“Yes,” they said, with Savage adding, “Most definitely.”

“How do we say this without being inappropriate? Is this a three-way relationship, or do you each have a separate relationship with him? How does this work? I’m curious,” King said.

“Well, both of those,” Clary said.

“We both have our individual relationships with him, and we all are family all together. We have our moments where we sit and watch movies all together, we go to amusement parks all together.”

“I’m not talking about, Azriel, going to movies and sitting, watching – going to parks. I’m talking about is it – is it a three-way sexual relationship between the three of you?” King asked.

“Sexually, well, first of all, I’m not here to talk about my personal life, and I would never share with no one what I do in or outside of the bedroom. And as a woman, I’m sure you would not either,” Clary said.

“Okay, then, so next question,” Clary said.

“No, you’re right, I would not, but this is a very different circumstance. And I think it’s a fair question,” King responded.

“It’s not a different circumstance. There are people all over the world who have multiple girlfriends. It’s no different,” Clary said.

“Do both of you all believe you’re in love with him?”

“Absolutely,” Savage said.
Asked whether their parents should be concerned, Clary said, “No.”

“Well, my parents knew where I have always been. For four years, they have known. They know that I’ve been well taken care of,” Clary said.

“They never thought you were missing, Azriel. They just were wondering if you were okay,” King said.

“Well, my parents have actually came to Chicago and seen me a few times. They’ve – I’ve talked to them. They stopped answering my calls,” Clary said.

King told Clary she spoke with her father the day before their interview.

“He says, ‘My daughter is brainwashed,’ and he’s very concerned. He said he was here two days ago, and you wouldn’t even look him in the eye,” King said.

“Okay, I wouldn’t look him in the eye because he’s a liar. He’s a manipulative liar,” Clary said.

“I’ll tell you why they’re concerned, Azriel, because they say, ‘She’s 17. We found text messages that indicated that she was having sex with R. Kelly when she was 17.’ Is that true?” King asked.

“Why would they want to lie about you, their daughter?”

“Okay, so when I first met Robert, my parents told me to lie about my age. So when I met him, he thought that I was 18,” Clary said.

“On top of that, when I was 17, my parents were actually making me, trying to get me to take photos with him, take sexual videos with him, all kinds of stuff.”

“Wait, wait, wait. Your parents encouraged you to do sexual videos with R. Kelly?” King asked.

“Yes, and they said, because if they ever have to blackmail him, what they’re trying to do now, they can use it against him, which is exactly what they’re doing.”

Savage nodded in agreement, adding, “everything that she’s saying is true.”

“Both our parents are basically out here trying to get money and scam, because they didn’t agree on what happened, you know, with music or whatever it could be. And they’re just very upset,” Savage said.

“This is the first I’m hearing, to be honest with you, that your parents are trying to get money from R. Kelly. Because your father told a very different story to me last night,” King said.

“Yeah, well, yeah, he’s– he’s the manipulator,” Clary said. “He’s very manipulative, so he’s the one you need to watch out for. But my dad and my mom… they started to send threats to both me and him. They said, ‘Oh, I’ll put all your naked pictures all over the world. I’m going to ruin you, I’m going to ruin him. If he doesn’t send $20,000 to this bank account by Monday, oh, I’m gonna put everything out there, and then $10,000 after that.’ You’re trying to solicit me like I’m some f***ing ho. I’m not, I’m your child.”

“I’m crying, because you guys don’t know the truth! You guys believe in some f***ing facade that our parents are saying. This is all f***ing lies for money, and if you can’t see that, you’re ignorant and you’re stupid as f***, because you want to be. All because that’s the world we live in. Negativity sells, gossip is what sells, rumors are what sell,” Clary said.

The parents of R Kelly’s girlfriends have however denied ever receiving money from him.

Taylor Swift reveals that her mother’s cancer is back