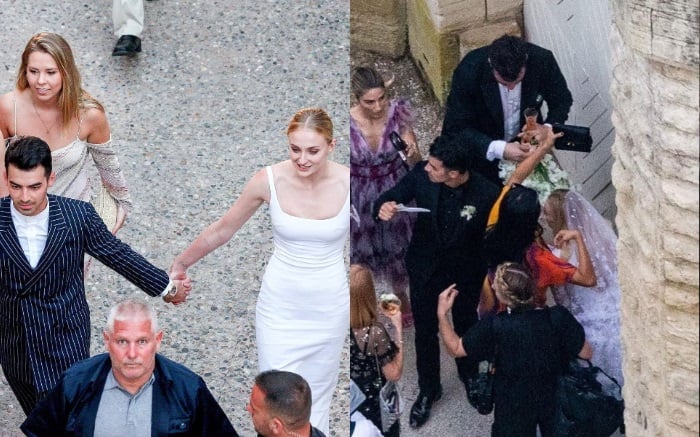 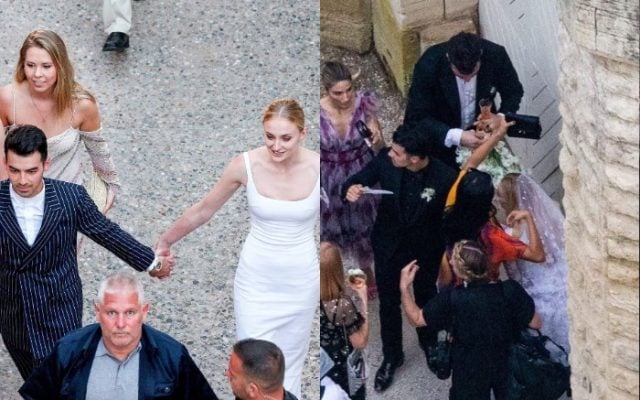 Sophie Turner and Joe Jonas got married 30th June 2019 for the second time in Sarrians in southern France.

Game of Thrones star Sophie Turner and American singer Joe Jonas got married for a second time in France on Saturday. The wedding was strictly a family and friends affair. The wedding also had in attendance Sophie Turner good friend and GOT star, Maisie Williams. The pair wed for the second time at an intimate ceremony at Le Chateau de Tourreau in Sarrians, France.

As reported by a source to Daily Mail, The stunning Château was beautifully decorated with white elegant flowers and glass candles, with Sophie getting ready for the big day with her bridesmaids and maid of honor Maisie Williams.

These pictures from the #JophieWedding are uniquely wonderful! We mean there's a dressed up dog! Swipe to see the full family alongwith our fav #PriyankaChopra's #photoshoot!

E! News confirmed that ‘white elegant flowers and glass candles adorned the aisles at the ceremony site’ while the guests and the happy couple later attended Château de Tourreau for the reception.

Sophie is wearing a white gown and is being escorted to the venue. She has a bunch of white flowers in hand and wears a veil with a long train. Joe walks along with her.

The 23-year-old Game of Thrones star looked elegant in a white long lace dress with sleeves, while the 29-year-old Jonas Brothers singer chose a black tux for the ceremony. The bride completed her look with a veil and light makeup. Sophie and Joe experienced a mix of emotions as they said ‘I do’ for the second time. The bride and the groom teared up while reading their vows as their friends and family cheered for them.

In the group picture, the entire Jonas family including brothers Kevin Jr, Nick, Franklin and the groom along with their parents, Kevin Sr and Denise, and Priyanka and Kevin’s wife Danielle pose with the majestic 17th-century chateau in the background.

Priyanka & her family getting ready for jophie's wedding! 💗💗

Among the highlights was Priyanka Chopra going desi in a stunning pink saree, while her husband Nick kept it cool in a sharp black suit. Priyanka chose a pretty pink flowing saree and was photographed with Nick. They happily posed with family for group photos.

For the rehearsal dinner, Sophie and Joe wore matching ensemble in red — she was in a scarlet gown and he was in an informal suit while the rest of the guests stuck to the dress code and wore white.

Wishing the lovely couple a Happily ever after.