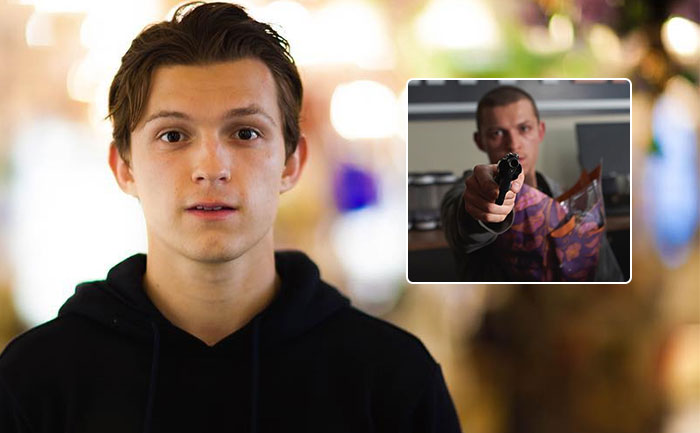 Tom Holland came back to social media after a much long break. The actor has officially now done a rebound on social media Instagram. Tom’s fans review his announcement of taking a break from social media to put all his attention for his upcoming non-Marvel Cinematic Universe film with Russo Brothers who are also directors of the popular film Avengers: Endgame.

Tom Holland’s film name is Cherry. Apparently, the actor came back to Instagram over the weekend and also filled in his absence from the famous social media by sharing the first look from the film. Meanwhile, the photo shared by Tom on his profile gives us a shocker as it is hard for us to believe that he is finally back and for real on Instagram.

In the latest picture, we can see him dressed in a dark grey jacket with what seems like a bouquet. Tom sports a bald hairdo that nearly left his fans in utter shock as soon as the first look came out online. He is apparently seen standing against a background where it’s written in bold ‘SHITTY BANK.’ Tom shares the picture on his Instagram account.

Check out the image below.

The film Cherry story outline is that it is centered around an Army medic who has returned from Iraq. However, he returns home with extreme undiagnosed PTSD. The film is based on the book written by Nico Walker’s book with a similar title, the writer deeply falls into opioid addiction and later on robs banks. Furthermore, he was caught and convicted in the year of 2011. Apparently, the movie is slated to release in 2020.