Nollywood actress, Tonto Dikeh has stated that her son, Andre Dikeh thinks his father is dead. She made this known while responding to a fan who told her Churchill’s blood still runs in her son.

Reacting to the comment, Tonto fired back saying the fact remains he thinks his father is dead. 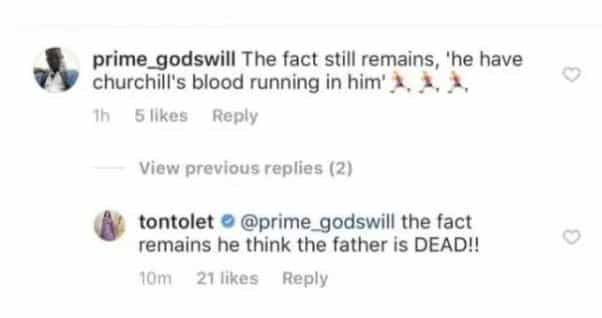 The actress also fired another shot by placing curses on her ex-husband’s mother as she denied ever pushing her.

“I pushed A woman I slept on the floor for her to lay on my person bed down??
A woman I buy things and give money to??
A woman that wears my own clothes because I took her like a mother??I PUSHED HER DOWN?
RACHEAL IF I PUSHED YOU DOWN MAY GOD PUSH EVERYTHING ABOUT ME DOWN!
BUT RACHEAL IF YOU SIT AND WATCH THIS LIE GO ON GOD WILL PUSH DOWN EVERYTHING YOU AND YOUR FAMILY IS AND WILL EVER BE!!
#YOUR DEATH AND PAIN WILL BE LONG AND HARD”, Tonto Dikeh wrote.