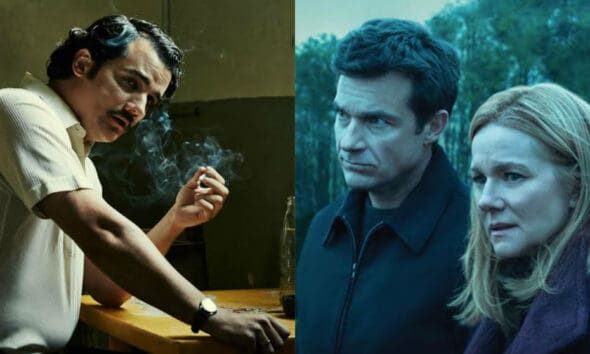 Breaking Bad has become a globally successful and probably the most critically acclaimed show ever. The show began with Walter White changing his way of earning from a normal high school teacher to drug kingpin. The journey of Walter White and his associate Jesse Pinkman, from the first time in the RV to Walt’s last moments in the Meth Lab is what makes Breaking Bad so great. The whole show follows the story of Walter White, Jesse Pinkman, and their illegal adventures in Albuquerque. Every single episode offers something that makes us watch more of it. Well, it has been 8 years since the end of Breaking Bad. Some people are so obsessed with the show they decide to rewatch and don’t give a chance to any other shows. Some people want to watch TV shows like Breaking Bad with a different storyline but can’t find what to watch. Well, in this list you can find shows like Breaking Bad, totally binge-worthy ones. You won’t regret watching any of the following shows in this list of 15 TV shows like Breaking Bad.

Animal Kingdom may sound like a Jungle Book story but it’s completely different here. If you like to see violence, crime, blood, heists, drugs, this show is particularly for you. The acting of this show is well appreciated by the critics and viewers. The lead role is a female character who is a gangster mom and grandmother to 4 criminally insane yet handsome fellas. Animal Kingdom has nice elements and will probably keep you busy as you start binging the whole thing.

This FX original is a highly praised TV show which has won a lot of awards but not so many people have watched or heard about it. This show is at some level inspired by real-life events and experiences that provides the show more realism. What makes The Shield like Breaking Bad is the characters going dark side, just like Walter White turning into an evil figure. The same happens with the lead characters in the Shield. But it’s real-life premise isn’t what makes it great, it is the characters and the storylines written and performed so well in the show.

HBO has ruled the TV all this time and produced several great shows. Deadwood is just another great example from HBO’s TV show menu. The show, Deadwood is set in the late 1800s. The theme is western, consists of talented actors who portray strong characters. The show gathered an enormous fanbase but unfortunately, it was canceled after 3 seasons which left mysteries and suspense and dissatisfied the audience. However, you can watch Deadwood: The Movie, a closure to the HBO show, and the suspense left in season 3 finale.

Justified is another Television show on this list by the FX television network. The show’s main theme isn’t western but the lead character who was a cowboy returns to his town to see that justice is served. What Justified offers us is a police crime drama in modern areas. Compelling stories and awesome characters, this show has. The show is praiseworthy but it isn’t much famous among the audience. Not so much people have seen it or know about it. But if you give it a go, you’re not gonna regret this.

Fargo, sounds familiar? Well yes, Fargo is a real-life based film by Coen Brothers. This series, Fargo is inspired by that movie and the Coen Brothers are the executives of Fargo. This series not only consists of crime but also drama and dark comedy. This FX original features some famous faces like Martin Freeman, Kirsten Dunst, Jesse Plemons, and Bob Odenkirk, and several other talented actors. So you don’t really have to worry about the acting department. Apart from that, the show provides 3 seasons of a violent dramedy that’ll totally grab your interest.

Boardwalk Empire is another great show on this list by HBO. This show features a legendary actor, Steve Buscemi in the lead role joined by other talented actors like Stephen Graham, Michael K. Williams, and Kelly MacDonald. Mafia storylines are always amazing, look at movies like The Godfather and GoodFellas. And Boardwalk Empire even features some real-life Gangster figures like Al Capone, Lucky Luciano, and Jimmy Darmody. Boardwalk Empire is an addictive show set in the early 1900s. Give 56 hours of your life to this show, you’ll love it.

Oz is another HBO show but not so popular. Not so many people have watched or heard about it either. Though, those who watched this HBO series may have realized about many important aspects of life. You could say that Oz is the male version of Orange Is the New Black. But the show doesn’t digress from showing the reality of life. The storyline is fictional yet realistic. The Oz takes us into the Oswald state penitentiary where violent criminals will do just about anything to support drug habits, engage in racial and homosexual inmates, and most of all, stay alive. This show is a must-watch for Orange Is the New Black fans.

This BBC original is another organized crime based television show which follows the story of Thomas Shelby and his gang in the early 1900s in Birmingham. It is inspired by a real-life urban street gang in Birmingham those the plotline is fictional. The show features amazing characters, action, dialogue deliveries, and a sweet tone of romance between Tommy and his lover. And as the history tells, you won’t just see internal gang affairs but a Tom and Jerry game too between the gangsters and the cops. The most important part is you won’t have to watch so many episodes as Peaky Blinders packs it all in six episodes each season.

Walter White would do anything to stop those who come in his way. Just like Breaking Bad’s Walter White, we see the real-life character of Pablo Escobar reaching the heights of his illegal drug career by overthrowing people and getting on top. Narcos is a chaotic show whose first two seasons depict the rise and downfall of the legendary drug lord Pablo Escobar. Just like Breaking Bad, DEA is involved here too. After the demise of Escobar, DEA tries to shut down the Cali cartel. Overall, the show is amazing.

This Netflix original could the closest thing that can come to Breaking Bad’s storyline in the Crime Drama genre. Both the main families are in the midst of drugs and crime? check. A cartel involved? check. Leading characters personal expertise led to an illegal career? check. Both of the families even use shell companies to hide their dirty business. If you wanted to see another version of Breaking Bad, Ozark is what you should pick. You wouldn’t feel bored while watching it. Both the shows have several similarities but when you start watching Ozark, you’ll not regret your decision.

If you’re a bike enthusiast and haven’t watched Sons of Anarchy, what are you waiting for? this show is made for you especially. Sons of Anarchy is probably the best show from the FX television network. Great arsenal scenes, family above all drama, organized crime vibes. This show provides so much to its viewers, 7 seasons full of amazing storylines and butt-kicking characters. Not just men but this show has strong women leads too. Well, don’t just stop watching after the initial episodes because Sons of Anarchy takes its time to hook you up until at least 5 or 6 episodes. Overall, it’s amazing.

Another hit HBO show on this list is the Sopranos. This show is praised for its amazing writing, performances, and dialogues. The show is based on the organized crime family, the Soprano family that manages the mafia in New Jersey. How the characters in this show, especially Tony Soprano, manage their personal and professional life makes us hate and love them at the same time. Just like Breaking Bad’s Walter White, Tony Soprano to struggles with his family and friends. Though Tony Soprano is the main character here, there still are many amazing characters in this organized crime television hit. Simply great.

What can we say about HBO? It has ruled the television for a long time and it still is ruling the television. The Wire is another hit show from the HBO television network. What the audience likes most about The Wire is the writing. Yes, The Wire is given the title of The Best Written Show Ever by many characters (We see you The Sopranos). And another element that the audience likes is that just like the show mentioned above “Oz”, it doesn’t digress from showing what’s true and what isn’t. The show is deep and complex. The Wire tells don’t just make for a compelling crime drama. They’re relevant incisive critiques of politics, class, and race relations that come naturally and effortlessly out of the show.

So, that was the list of 15 shows like Breaking Bad. All of them are amazing, start with anyone you want. You won’t regret it. If you think there are any more tv shows not mentioned on this list, don’t hesitate to share it with us in the comment section.