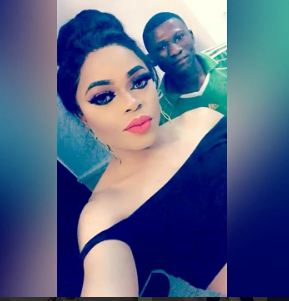 Popular gateman and dancing partner of controversial cross dresser Bobrisky has finally spoken out on the Arrest of his boss who was arrested on Nov 7, 2017 by Nigeria Special Anti-Robbery Squad in his lekki home.

Although Bobrisky has ordered his gateman not to say anything about the matter of his Arrest but after being pressured, he decided to have an off camera interview with Aunty Bukky who is following the Arrest case of Bobrisky.

According to Aunty Bukky, She said the gateman wasn’t around when his boss was arrested that he had gone to get Coke and groundnut.

This followed after she posted a video and captioned it

“Jacob went on to say; “I was not around when the police came to the house to arrest my Oga. I went to buy coke and groundnut. One of our neighbours told me they beat him up and threw him over the gate because I locked it before I left! My Oga asked me not to talk anymore please leave me alone!” • • Aunty Bukky will keep you updated as this case evolves, however the news reaching the AB camp suggests business mogul and fellow bleaching cream seller Toyin Lawani is behind Bobrisky’s arrest. Side note ? see how fresh Jacurrb is looking, Na wa o!! • #auntybukky#bobrisky#jacob#toyinlawai#SARS#transgender#gay#nigeria

Guys Get In Here: Slay Queen Says She Has 5 Boyfriends And She Is Looking For More

Olamide Claims His 17track Abulm Was Made In 48hrs