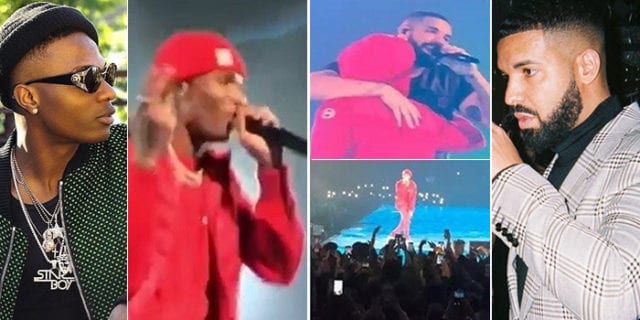 Nigerian international singer, Wizkid lit the stage on fire when he performed his hit song ‘Closer’ with Canadian star Drake at the O2 Arena in London.

This will be the first time the both of them will be performing the song together on stage since its release in 2017.

The video below shows Drake dropping the intro to the song before Wizkid came and sent the fans haywire with his electrifying performance.

This will be the singer’s second time performing at the O2 Arena. First was when he made history by being the first African to hold a sold out show last year.

As the 28 year-old Surulere-born singer was about to begin the performance for his hit song `Come Closer’, Drake joined him on stage for an epic, energy-filled display.

As the performance for `Come Closer’ drew to a close, a visibly thrilled Drake said, “I need one more song’’, indicating his intention to perform another song with Wizkid.

The DJ duly obliged and the song `Soco’ began to blare from the speakers. Upon completing that performance, Wizkid briefly left the stage.

This was in completion of Drake’s five province tour of Canada in the early hours of Tuesday.

Too mix up in drama to go outside… 🔊🇬🇧