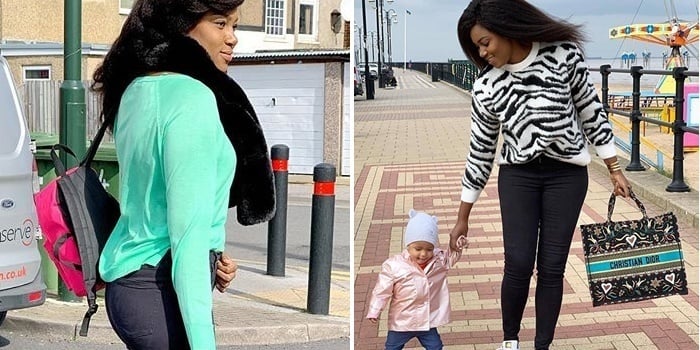 Yvonne Nelson has appeared on the front page of a UK newspaper. This follows a recent photo she took with her daughter at a beach near Grimsby

Ghanaian actress Yvonne Nelson has been featured in a United Kingdom newspaper over her latest photo with her daughter, Ryn Robert.

It will be recalled that Nelson recently shared a mother and daughter photo as they stepped out in style.

In the photo shared by newsmen, the mother and daughter were spotted rocking a similar fashion style. While Yvonne wore a black and white pullover over a pair of black jeans. Ryn, in a similar style, wore a shiny pink jacket over a blue pair of jeans.

The photo was taken at the Cleethorpes Beach, a seaside resort near the town of Grimsby in Lincolnshire, England.

Seen by the Grimsby Telegraph, a local newspaper in the area, as good promotion for the beach, featured Nelson’s photo on the front page of its Friday, March 22, 2019 edition.

The story was captioned:

An excited Nelson shared screenshots of the newspaper’s publication on her daughter’s Instagram page with the caption:

“.He he he he … mum and I on the front page of my dad’s hometown’s newspaper.” CLICK HERE TO JOIN OUR EVER ACTIVE WHATSAPP GROUP
Related Topics:Yvonne Nelson
Up Next

Khloe Kardashian breaks down in tears, says her family is ruined