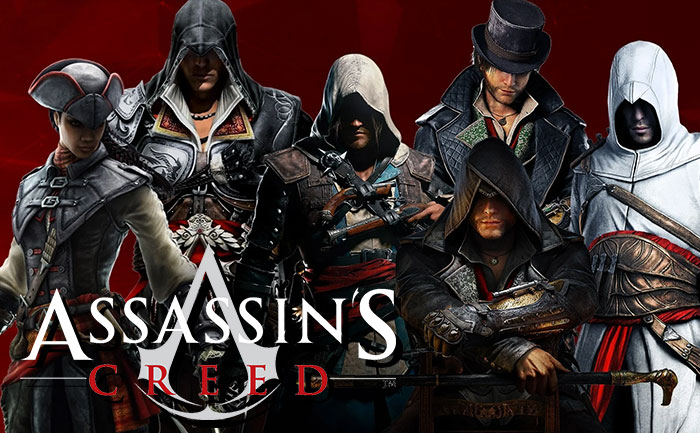 Assassin’s Creed is a game that has been around for over 10 years and still as popular as the day it first launched. The game has released a total of 20 games so far with plans of a new one already on the way.

The Assassin’s Creed Saga has morphed into a franchise that amasses 9 novels, 11 comics, a Michael Fassbender film, several spin-offs, and a possible TV show.

Even a casual gamer has most likely heard of the series which is packed full of blood, gore, and action.

Here we have put together a list of all the Assassin’s Creed games released so far, complete with a short overview. 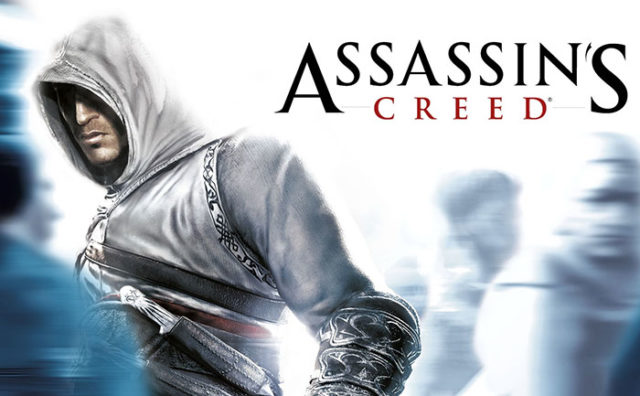 This was where it all began. Nolan North voiced the title character of Desmond Miles in a game that was unapologetically different from its contemporaries. Assassin’s Creed series didn’t follow the tried and tested formula of the popular niche games at the time. Patrice Désilets believed in his idea though and his belief paid off.

The first Assassins’s Creed game of the series was set mostly in the Holy Land in 1191. Desmond Miles wakes up in a laboratory, attached to Animus, a machine that allows him to relive the “genetic memories” of his bloodline. When Desmund enters the Animus, he starts Altair’s narrative of retrieving the golden orb. On failing the mission, he is stripped of his weapons and rank. To retain his title, he must go on a mission to assassinate nine members of the Templar organization.

This Assassin’s Creed game received average to semi-positive reviews. The prominent criticism for the game was that it descends into repetition fairly quickly.

The first Assassin’s Creed, however, was just a launchpad for the franchise. 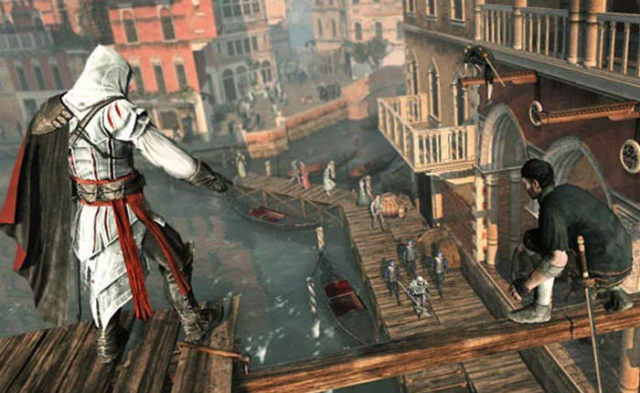 Assassin’s Creed II followed the first game, taking place immediately after its present-day events. This is, to date, one of the most fan-loved game of the series. It also introduced the series’s most cherished protagonists to date, Ezio Auditore da Firenze.

In the second installment of the Assassin’s Creed series, Desmond is dwelling in the memories of Ezio. His story is set in the 15th century Renaissance.

Ezio escapes the city to his uncle Mario’s village after he watches as his father and brother are being hung. he gain a few allies in his quest for revenge including the Legendary Leonardo Da Vinci.

Desmond and Dr. Vidic are flummoxed when they discover parts of Ezio’s memories are being protected and Animus can’t detect them. 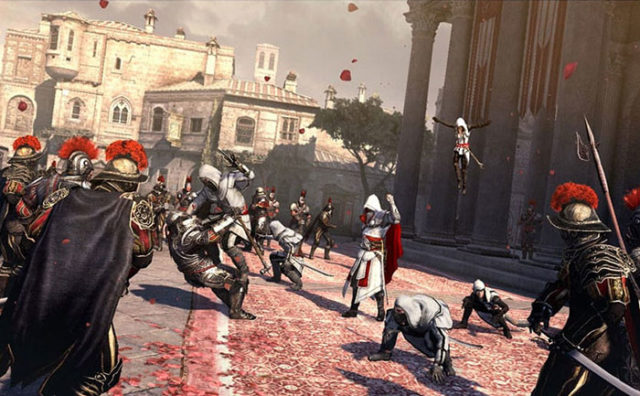 The Assassin’s Creed: Brotherhood continues the story from Assassin’s Creed II. The story of Ezio picks up from when he exits the Vault. He returns to his Uncle Mario who gets killed by Cesare.

Ezio sets out to restore Rome to its former glory, assassinating key players in Cesare’s organization. He eventually recovers the Apple and hides it. When Desmond wakes up, he is able to retrieve the Apple from what he has learned from Ezio’s memories.

Brotherhood added a new management system that allowed players to recruit people as assassins that could be called for aid in combat or sent on missions for rewards. It was also the first Assassin’s Creed game that incorporated competitive multiplayer format.

Assassin’s Creed Brotherhood is a non-taxing game that requires a dual-core processor, 2GB of memory, a DirectX 9.0 video card, and 8GB of hard drive space available. 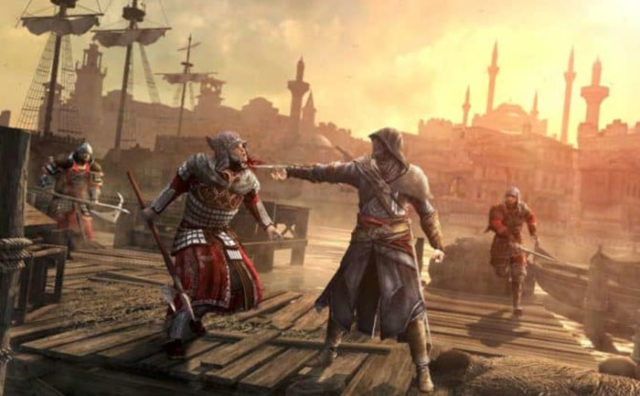 Revelations is the final chapter of Ezio’s story. For this part, the players get to see all three protagonists Altair, Ezio, and Desmond through the game.

Ezio’s story leads him to 1511 A.D. Constantinople. He discovers that Altair has discovered a way to end the Templars for good. Desmond, however, is stuck inside the Animus where he finds the Black Room. He must now find a way to link him with Altair and Ezio to wake up from his current state.

Assassin’s Creed: Revelations differs from its predecessors in a few key ways. This installment of the game introduces bombs into the arsenal of weapons. Hook blades allowed for zipline travel through the city in addition to a tower defense minigame.

Revelations is memorable in the Assassin’s creed series mainly as a closing point for Ezio’s story.

Assassin’s Creed: Revelations needs a dual-core processor, 2GB of RAM, a DirectX 9.0-compatible GPU, and 12GB of space available on your SDD or HDD. 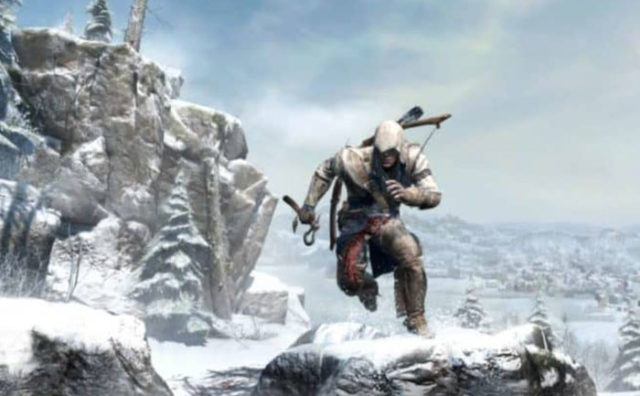 The fifth installment of the series takes place during the American Revolutionary War. The protagonist is a Native American named Ratonhnhaké: ton who takes the name Connor to blend in.

Juno influences Desmond to dive into the memories of Haytham Kenway in 1754 England.

The game brought with it a smattering of new features like naval exploration, animal hunting, and weather changes. 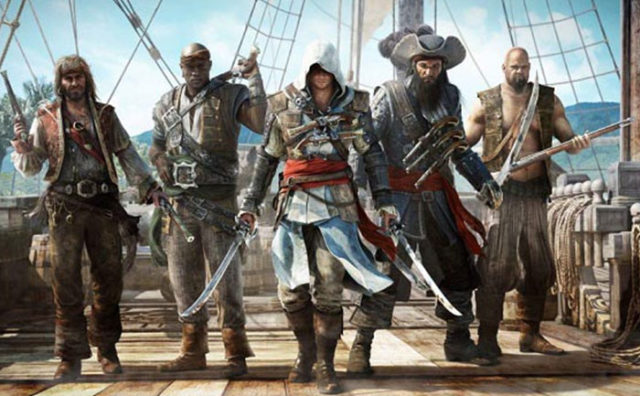 Edward Kenway, the protagonist, is an 18th-century pirate and Conner’s grandfather. He unveils a plot where the British Templars and Spanish empires use their power to target the Sage.

The game had an open-world approach with an emphasis on Naval exploration. Players also had the ability to upgrade their ship.

Released on October 29, 2013, the game is available for PlayStation 3, PlayStation 4, Xbox 360, Xbox One, Microsoft Windows and Wii U.

System requirements for Assassin’s Creed IV: Black Flag include an Intel Core i5-2400S or an AMD Phenom II x4 940 processor, an NVIDIA GTX 260 or an AMD Radeon HD4870 graphics card, with at least 4GB of RAM and 30GB of storage available. 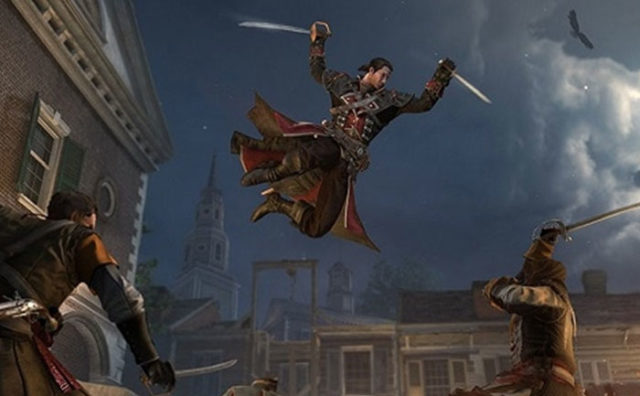 Assassin’s Creed: Rogue offers players the chance to play as a Templar and go over to the dark side. The setting is similar to its predecessor, taking place in the Colonial era. The emphasis was still on the naval exploration but the setting switched from the Caribbean to the Arctic.

Shay Patrick Cormac is the latest recruit of the Colonial Brotherhood of Assassins. In training, he meets another assassin Adewale who brings news of an earthquake that destroyed Port-au-Prince. Cormac is enlisted in an investigation into Templar’s interests in a Precursor artifact and manuscript that are linked to the temple.

Shay ultimately decides to forsake the mission and ends up becoming a senior member of the Templar Order.

Benjamin Franklin, voiced by Rick Jones, also makes an appearance in the game. 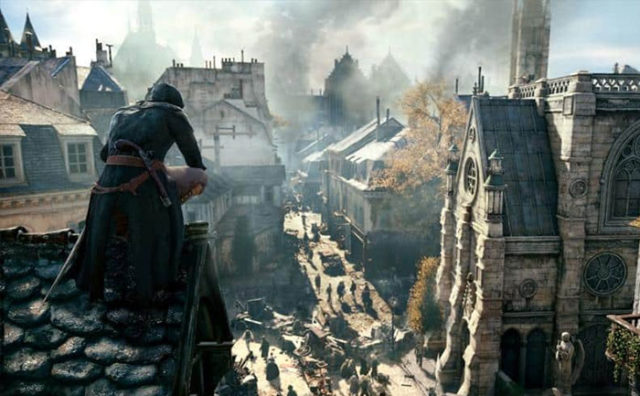 Assassin’s Creed: Unity puts players in the shoes of Arno Dorian who is a Paris assassin during the French Revolution. While this game did not have any core differences to its predecessors, it was the first Assassin Creed game to offer a cooperative multiplayer. It did add to the arsenal of weapons, notably adding the Phantom Blade which is the crossbow and the traditional Hidden Blade merged into a single weapon.

Assassin’s Creed: Unity was a mixed bundle, to say the least. It amassed praise for its visuals, improved gameplay, customization options, multiplayer-oriented format, mission design, setting, characterization, and narrative. However, there was severe backlash over its lack of gameplay-innovation, unrefined controls, and numerous graphical issues and bugs upon release. In the end, Ubisoft ended up issuing an apology and offering compensation.

AC: Unity is a bit steeper in terms of system requirements. The game recommends having at least an Intel Core i7-3770 or AMD FX-8350 processor, a GTX 780 or Radeon R9 290X video card, 8GB of RAM, 50GB of storage space available. 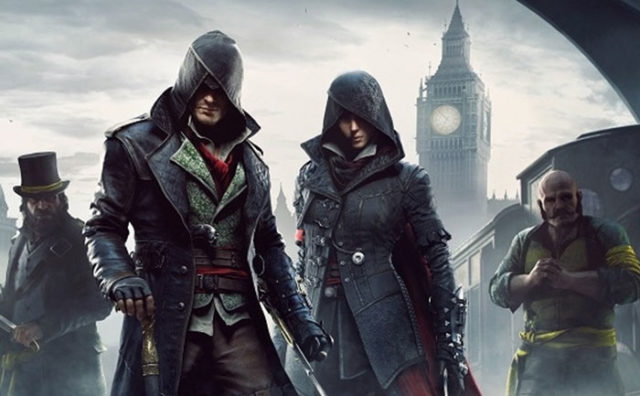 Assassin’s Creed: Syndicate released on October 23, 2015, for PlayStation 4 and Xbox One. On November 19, 2015, a Microsoft Windows version also released.

The game primarily takes place in 19th century London, during the Victorian era. Players dive into the story of the twin protagonists, Jacob and Evie Frye. Both Jacob and Evie are playable. The twins are assigned with the daunting task of freeing London from the Templars rule. Players will guide the Fryers as they gather an army in 1868 during the peak of the Industrial Revolution.

Assassin’s Creed: Syndicate was the first game in the series to offer multiple protagonists. 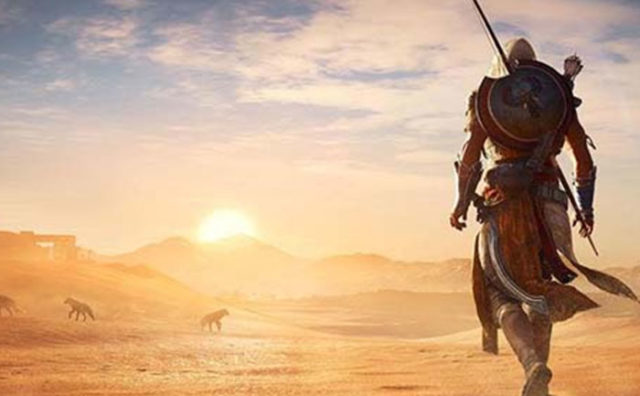 Assassin’s Creed: Origins gave a new life to the game series. The game introduced some major changes with the setting and gameplay. The premise shifts way back in time to the Ptolemaic Egypt. In addition, it also offers a new combat system and RPG elements.

Origins brought some major changes to the combat making it much more dynamic. Players could damage multiple enemies with a single attack and so could the enemies.

The story centered around Bayek and his wife Aya as they try to protect the people of the Ptolemaic Kingdom. The Pharaoh is struggling to maintain his rule but harbors dreams of expanding his kingdom. Cleopatra is introduced as the sister of the Pharaoh. She is gathering an army to launch a counter-coup against the Pharaoh while the kingdom is under constant fear of invasion by the Roman Republic under the command of Julius Caesar. Bayek is a Medjay who comes to uncover the secret forces manipulating these events. 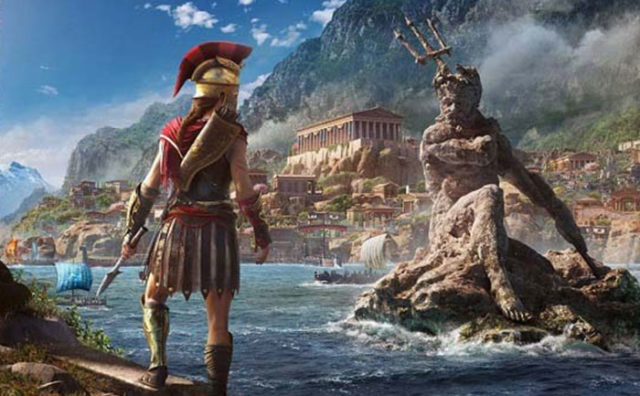 Assassin’s Creed: Odyssey is the 11th major installment in the Assassin’s Creed series. The game was released worldwide for Microsoft Windows, PlayStation 4, Xbox One, and (in Japan only) for Nintendo Switch on October 5, 2018. A Stadia version was launched alongside the service in 2019.

The plot is set in 431 BC and focuses on the Hellenic world and the Peloponnesian War. It tells the story of a war between Athens and Sparta. Players can choose the side they wish to fight for. Assassin’s Creed: Odyssey also allows players to pick between a male or female protagonist both of whom are mercenaries as well as the descendants of  King Leonidas.

The game received mostly positive reviews for its visuals, combat, story, and fleshed out characters. However, it did receive some criticism for its reliance on grinding, and microtransactions.

Assassin’s Creed Series: Odyssey is the most demanding AC game to date. It’s recommended requirements are an Intel Core i7-3770 or Ryzen 5 1400 processor, a GTX 970 or a Radeon R9 290 video card, 8GB of memory, 46GB of storage space available.