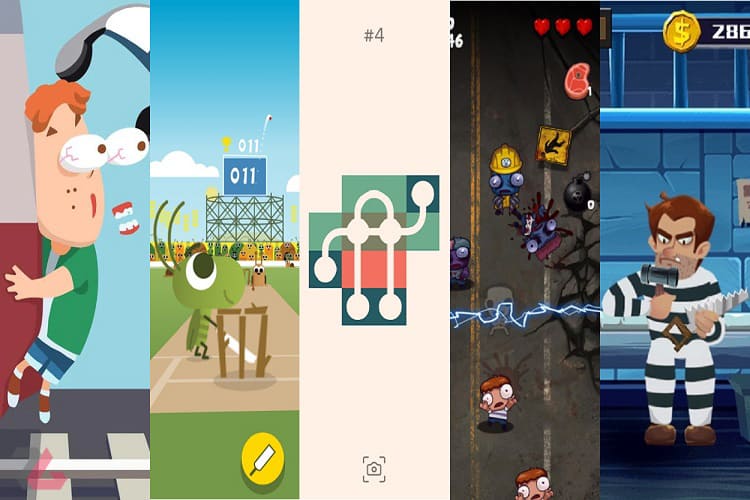 In this article, we are going to introduce some of the best Android and iPhone games from different genres that are less than 25 MB in size. Get along with Plushng.

There are a number of reasons why users install lightweight, compact Android or iPhone games on their mobile phones. Space constraints on the device or the weakness of mobile phone processors and other factors that prevent users from having a fun and entertaining gaming experience. Also these days, compact mobile games can fill our leisure time at home.

In this post we have tried to collect some of the most entertaining games of the last two years from different genres. So join Plushng to have a brief look at these games. So if you’re looking for a compact Android and iPhone game, go with Plushng.

The games listed here are less than 2 MB based on the Android version, and the iPhone version may be larger.

Die in 100 Ways Android game is an interesting action and scary game. The evil role of this game is not demons and monsters but death itself. In this game there are different characters whose fate is in your hands. In fact, you are going to compete with Death Angel in this game. The Angel of Death wants to kill these people in different ways. The player’s job is to keep the characters as alive as possible by directing the characters and performing action-oriented and varied minigames.

In Modern Sniper’s first-person shooter action, players are set to kill their targets in the streets and on the rooftops of buildings with their sniper rifles, as well as assassinate special targets in the role of a professional on-off killer. Players can choose from the seven weapons available in the game, but Sniper can upgrade his character and weapon skills as he progresses.

Bike Racing 3D is one of the most exciting games on this list. Despite the 2MB size of the game, it’s graphics effect are great. It’s easy to control the vehicle and its gameplay, but there are many challenging stages to play. Players can experience the game by choosing their own motorcycle from among the five motorcycles available in the game. The variety of stages is very good and the career part of the game is made up of 5 tracks.

Our next game is a classic puzzle-based puzzle game. It’s been a long time since Unblock Me FREE was released, but its creators have kept the game alive by adding different puzzles over the years. The game now has more than 4,000 puzzles and puzzles in four parts. Multiplayer and competing with friends and daily challenges are also in play. If you like to challenge your mind Unblock Me FREE game is the right option for you.

In Basketball Shoot, players are required to throw a limited number of balls into the basket. The more balls thrown into the basket, the more points the player gets. The gameplay is simple and the control of the game is set by the launch angle and firepower. You can change the location of your basketball experience. The distance of the ball from the basket as well as the height of the basket from the ground will vary at different stages.

The second racing game on the list is Racing Air. There is no attraction in the Android and iPhone Racing Racing games , and players compete in the sky. Playing with two main modes and a variety of machines can provide a different experience for fans. Enjoy driving in the air by downloading this 2 MB game.

The next game on our list is a skateboarding arcade game. Candy Mobile Studio, inspired by Vector, has created a fascinating and exciting run in Running style. In this game you have to escape the shadows. Along the way, test your speed by collecting coins, bypassing obstacles, and using power ups. There are over 2 stages in the game that run in different environments from forest and parks to urban areas.

Infinity Loop’s puzzle-based game is more of a relaxing game with fun music than a complicated puzzle game. The game enjoys simple gameplay. Players must complete a closed loop by touching the puzzle pieces. Putting these rings aside, you get some fun and creative shapes. As the name implies, the stages of the game are unlimited and can be enjoyed for a relatively long time.

The least compelling game on the list is Doodle Cricket. Doodle Cricket, with its 2K volume, is a cricket simulator. Your rivals in the game are based on Google’s artificial intelligence, so you’ll have to go through more challenging and challenging stages. The gameplay is summed up with precise timing and momentum to hit the ball. Doodle Cricket can look attractive and fun despite its simple design and minimalist graphics.

In the Prison Escape action game you are supposed to escape the prison in the way you plan. The playable character is sent to prison in a plot. Players must find a fugitive map inside the prison in various ways. The inside of the prison is like an open world game environment, and you can go to different parts of the prison. You can fight gang members inside the prison and gain prestige by defeating them, or work your way up and escape a tunnel. Overall, more than 4 types of jailbreak methods are included in the game, so players have plenty of freedom to practice.

In the arcade game Zombie Smasher you have to defend your city against countless attacks of zombies. Simply destroy them by touching the zombies before they reach the entrance doors, though you must be careful of your own people who are among the zombies. The variety of stages is good and more than 5 levels are included in the story section. The game also has Survival and Time modes that in survival mode you must survive in the endless waves of zombies as long as you can. Overall, Zombie Smasher-based action and zombie games can be a fun and exciting pastime. Don’t miss this compact Android and iPhone game.

If you don’t have enough space on your smartphone for the GTA gaming experience, Auto Gangsters is the right option for you. In the open world game Auto Gangsters players are given complete freedom. You can explore the entire game environment and drive with most vehicles in the game. There is a great variety of weapons in the game as well. In addition, the game has more than 2 missions to perform. Release more areas of the game by completing missions and game progress. Finally, if you’re looking for a replacement for GTA on your smartphone, Auto Gangsters is worth a try.

In Break the Prison game you are going to be jailed by solving puzzles. In this game, the player is sentenced to death for not committing a crime. You must escape from prison as a mechanical engineer before the sentence is due. Players must find the way to jailbreak by solving puzzles.

Find your way through enemies and obstacles in the action and two-dimensional game Apple Knight: Action Platformer and reach the destination. In this way you have to fight knights, monsters and other magical creatures and save your land. The game is followed in four different environments and each section has 5 stages. You have to defeat their boss to move on to the next part, that is to say, the game has four busses. Although the number of stages could have been greater, each stage is designed with great care and precision and does not give the player the feeling of being repetitive while experiencing the stages.

The Puzzlerama game brings together a variety of brain teasers and puzzles. As is known from the game’s long name, a variety of classic puzzles such as Tangram, Shikako, and Bridges are included in the game. In total, the Puzzlerama game contains more than 2 different puzzles in the form of 2 different games. If you are interested in brain teasers, this game can keep you entertained for hours.

What do you think about the games presented in this post? If you also know other good games that are very small in size, share it with us in the comments.

Related Topics:Best Android GamesFeatured
Up Next