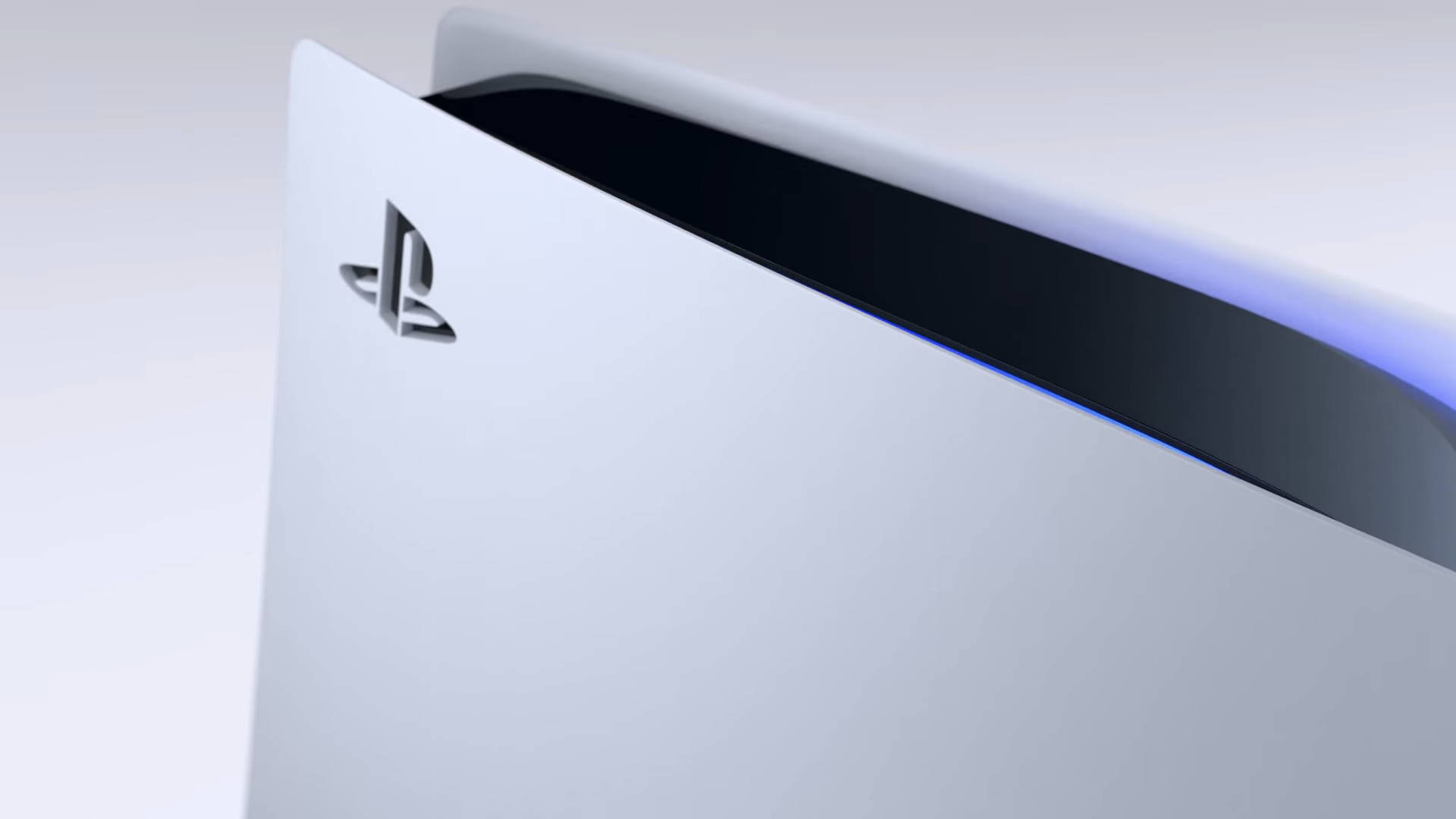 Congratulations, person who just picked up a PlayStation 5. Sony’s latest console is a real beast.

The new generation of gaming hardware is more customizable than has been the standard before. Consoles play an eternal game of catch-up with PC tech, but now we’ve finally reached a point where the visual upgrades are marginal (but still welcome) while the more invisible performance upgrades are what really change the game(s).

Sony’s new machine smartly leans in on putting all that power in the hands of the players. You have a choice now in how you want to experience your games. It’s not just a question of difficulty anymore; it’s also presentation. And that’s where the PS5’s new “Game Presets” menu enters the fray. 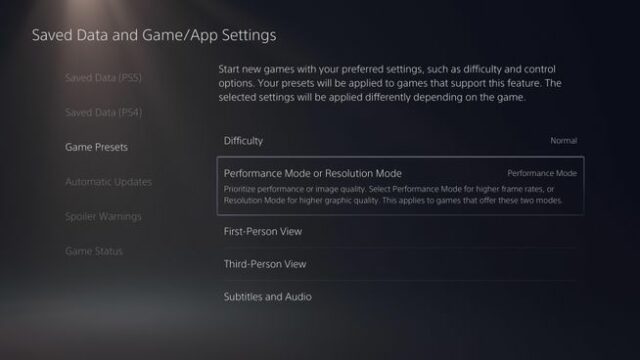 You’ll find it under the “Saved Data and Game/App Settings” menu, which you get to by selecting the little gear icon on the PlayStation home menu.

Game Presets lets you set up some defaults that kick into action the first time you fire up a game. The Difficulty and “Subtitles and Audio” options speaks for themselves. “Performance Mode or Resolution Mode,” meanwhile, lets you decide up front if all games will default to prioritizing smooth gameplay or fancier graphics. And finally, the first- and third-person view settings let people who prefer inverted controls have games default to that.

None of these settings are especially new, to be clear. Even the Performance/Resolution one dates back to the previous generation, with the PS4 Pro offering such an option in the games that took advantage of its souped up hardware. But the PS5 roping these decisions into one place for you to set them as global defaults is new, and it’s great.

Next, you’ll want to pay a visit to the Spoiler Warnings page in the same “Saved Data and Game/App Settings” submenu. This isn’t as clear at launch for obvious reasons, but the PS5’s home menu will eventually be the place to find player-created video content, including game guides. 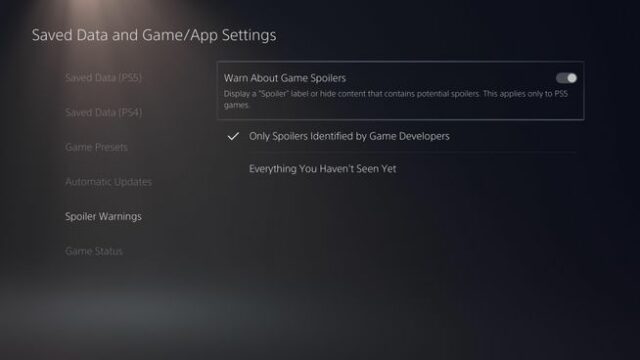 By default, your PS5 will warn you about any content that’s potentially spoiler-y, but only if said spoilers have been pre-flagged by the developer. If you’re very worried about someone spoiling your good time, switch that option to “Everything You Haven’t Seen Yet.” And if you just don’t care, turn the whole thing off. Simple stuff.

Once you’re done there, head back to the main settings menu and scroll all the way down to “Captures and Broadcasts.” The latter piece of that isn’t so important unless you’re someone who streams, but if you like grabbing clips and screenshots there’s good reason to spend a little time tweaking the capture settings.

Here, you can adjust the formatting used for both screenshots and video clips. That second one defaults the “most efficient” video format, WebM. I prefer to grab my clips as MP4s, since they’re more widely compatible with different software after I dump them on my computer. (You can also choose to capture at 4K resolution, since clips default to 1080p.)

The real important piece of this submenu, though, is “Shortcuts for Create Button.” The Create button, in case you’re not aware, is in the same spot as the PS4 controller’s Share button. It does basically the same thing, too, but new console, new name. 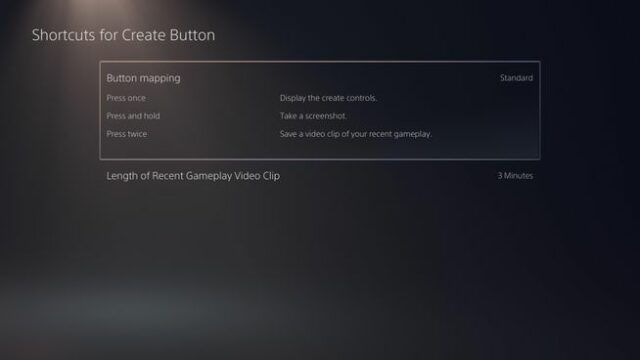 As someone who frequently grabs screenshots and clips, the first thing I picked up from this menu is the shortcuts. I knew long-pressing the Create button could grab a screenshot, but I had no idea that double-tapping it would do anything.

In this Shortcuts menu, you can change what those button presses do. You can also adjust the length of gameplay clips captured via shortcut. It defaults to 30 seconds, but three minutes feels like the sweet spot to me for most clips. The setting maxes out at one hour, so you can grab a pretty large chunk of footage via shortcut.

Your final stop should be the dashboard shortcuts menu. No matter what you’re doing or playing, tap the PS logo on your controller to bring up a horizontal menu of simple icons at the bottom of the screen. Here you can quickly access things like your friends list, a rundown of what’s downloading, the app switcher, and more. 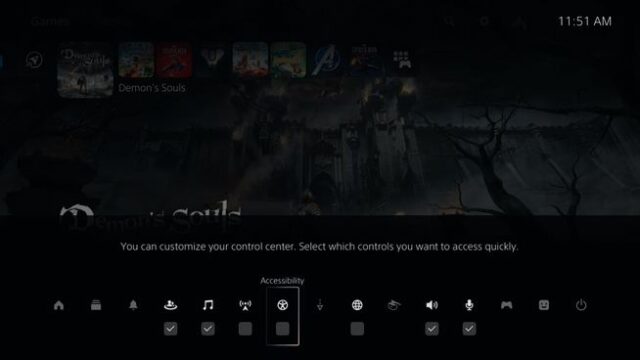 That’s handy on its own, but if you press the Options button while you’re navigating around the shortcuts bar you can tweak which shortcuts actually appear. The options are somewhat limited, with some that can’t be removed and a limited selection overall. But the important stuff is in here.

Sony has made much of its Spotify partnership over the years, but if, like me, you’re not a subscriber, it’s easy enough to banish the Music shortcut from the pop-up menu. The default setup should work for most people, but having the ability to add quick menu access for options like Broadcast and Accessibility is a great touch.

None of this is necessary, of course. You can plug in your new PS5 and start gaming immediately without touching any of these settings and you really wouldn’t lose much. But features like Game Presets and expanded capture options let you put this very expensive piece of gear to work for you. It’s worth taking advantage. 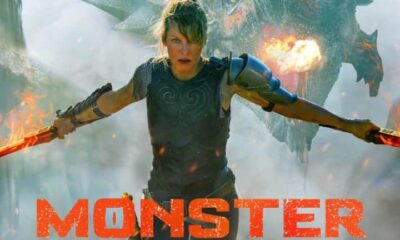 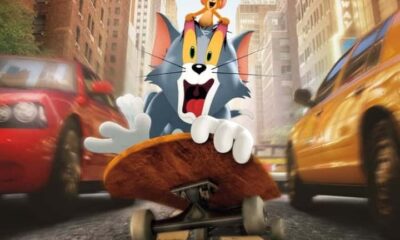