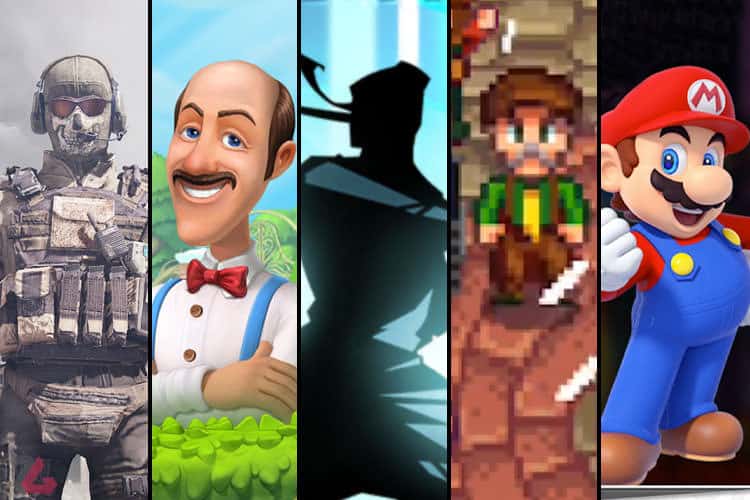 One of the things that can be done during quarantine is playing. That’s why we decided to introduce you to some of the most entertaining mobile games of the past few years to fill your free time with them. Stay with us.

It may be best to stay home and rest as the New Year approaches and the spread of the Coronavirus among the people of the world. Surely playing along can keep us entertained, also with keeping things healthy and moving away from others. For this purpose, we tried to bring together some of the most entertaining mobile games of recent years and briefly introduce them to you. Riddles like Doors and Rooms: Escape games or sports like Dream League Soccer 2020 are just a few of the games on this list that you can read about below.

The Best Mobile Games To Experience

Noodlecake Studio ‘s Alto’s Adventure game is the perfect symbol of a work of art on the mobile platform that was released to audiences 6years ago. Players in the character were named Alto and had to ski on the snowy mountains. The game is an infinite runner effect and has a beautiful visual design. Nudelkick Studio After the game’s success, the next release is called Alto’s Odyssey and this time taking players to Alto and his friends in another unique experience in the wilderness and hot plains. In this release, the creators put into action a game called Zen where players can ski infinitely in the endless desert without coins, points and power ups. You can also capture beautiful images of the game environment and share it with your friends using Photo Mode.

Bridge Constructor Portal is a fascinating work of studio Headup bridge. It is inspired by the ports of Portal now even, Brings a different experience to the players. In this game, players play the role of an engineer who has to implement their plans after being hired by a bridge company. Your goal is actually to get the cars from it destination to another destination and along the way you have to do this by building solid bridges. The game is extremely physics-based and you need to be careful in your builds. Manufacturers have also put in place portals that you can use to reach cars. The way portals work is, for example, when a car enters the first blue portal, leaving the second blue portal. These two general mechanisms have made Bridge Constructor Portal gameplay particularly challenging, especially at high levels. You can download and experience this game from the Apple App Store and Google Play Store now.

The next game is a fun endless runner where you have to cross a funny chicken through the crowded streets. Crossy Road by HIPSTER WHALE STUDIO is a fun and addictive work that can engage you for hours with a simple, pixelated graphics gameplay. This game is inspired by the game ‘Frogger’, It puts you in a busy, busy environment where you have to find your way through vehicles. The main character of the game is a chicken that you control by tapping on the screen. The pixelated environment of the game is made up of cars, roads, trees and obstacles, all of which pose a threat to you. You should try to move the main character as far as you can and earn points by moving left and right. Finally, share your points with your friends and see which one has the best ability to cross the street with this cute chicken. So if you’re looking for a scoring game, don’t miss Crossy Road.

These days, due to the large numbers of people living at home, many gamers are switching to online and multiplayer games. For this reason, it may be the best opportunity to spend one of the best mobile games of the last few years in your spare time. Call of Duty®: Mobile, which will undoubtedly entertain many audiences. In this first person action shooter you can experience exciting multiplayer competitions with your friends and other players. The competition will be in the form of two 4-person teams and the team that wins the most kills and points against the winner will win. Also included in the game is Activision’s Betel Royal Mode, which is released to players at higher levels. Game maps are highly detailed and allow players to plan their attacks based on them. The realistic graphics of the game are undoubtedly the most important feature of the Cal version of the mobile version, which sets it apart from other similar games on the mobile platform.

Among the games on the list, we have a game for football fans who can experience the sport while the prestigious leagues of the country are closed. Dream League Soccer 2020 by Fisrt Touch Games Studio is the newest version of this popular series where you have to try and win the championship in the role of coach of a newly established club. The game control system uses the virtual analogue on the left and the buttons on the pass, shoot, and crossbar on the right. Of course, the right buttons perform differently when defending, and players have to control their team and win their team. Your team players have energy strips and need to be replaced if they are tired. The creators have put in place an automatic switching system for the convenience of the players that you can use if needed.

Introducing a escape room game might be a bit ironic when you need to stay in your room more than ever. However, for the next introduction of this list, we have included Doors and Rooms: Escape games by Gameday Inc. Studios. Released for Android and iOS operating systems. The gameplay is that you have to get different items and combine them to find your way out. The game uses different math riddles and you will need a pen to solve some of them. The game’s graphics are pixelated and players can interact with the environment in the best way possible. The artistic design of the steps along with the various puzzles ahead will make you not tired of finding the exit key and enjoy every single moment of the game.

The next game in the list is a fun and different work from a freelance developer named Adrian DeYong, where you have to find different items and people. In the game ‘Hidden Folks’ you travel to many places from the beach and the desert to the factory and the jungle, and you have to find what the game has asked you to do. All the characters you see in the game have a little story with them, and it’s your job to find the missing object or the person using the big clues. The environments and characters of the game are hand-crafted and the creators only use black lines. Game events take place in more than 2 different areas and in the process you have to find more than 2 hidden targets. If you are interested in challenging Kojal games, install Hidden Folks and try to find the missing items and characters in the process.

Nintendo and Mario are characters almost any gamer knows. Mario, has been in a series of different games, each providing a different experience for players. Now this beloved character in Nintendo’s latest Mario Kart Tour game. She’s in attendance and is going to compete with her other friends in a breathtaking karting match. The game has a simple control system and you just have to swipe left and right to steer your carting machine. Along the course of the game, there are various items ahead of you that you can use to outrun your competitors. The game’s graphics are cartoonish and three-dimensional, and the creators have used cheerful and varied colors to design the characters and environments. Different characters and machines are released to you as you progress through the game. You need a permanent internet connection to experience the Mario Kart Tour, which shouldn’t be a problem considering all of us are home these days.

Shadow Fight 2: Special Edition is a full and paid version of the experience that made players experience one of the best fighting games on the mobile platform. In this game you play the role of a character named Shadow, who must fight the demons to defeat his fighting skills and defeat them one by one. He comes to his master and asks for his help. The main difference of the Special Edition is the elimination of all paid items and ads, and of course the addition of new story content to the game. So that you can now play the role of the Shadow Master and review his memories. The personalization part of the game is undoubtedly one of its strengths that brings many weapons and items to the players. Upgrading the main character of the game is an important part of the gameplay, as you progress through the stages with rivals that have much higher fighting abilities than you. The creators have put different parts of the game to make Shadow Fight 2: Special Edition a completely entertaining piece of content.

Clash Royale is a massively popular multiplayer online battle arena (MOBA) that is one of the top-grossing games on the App Store. Made by the same developers as Clash of Clans — Supercell. The game starts you off with a full battle deck’s worth of cards —which is eight — but you can collect more cards as you play the game and win matches. Not all cards are created equal; some are significantly rarer to find and some you can only find once you have leveled up high enough to battle in different arenas. You need a permanent internet connection to experience Clash Royale.

In this article, we tried to introduce you to some of the most entertaining mobile games that you can experience for hours in these quarantine days. Like you, we hope to get through these tough days as soon as possible and enjoy our time with friends and relatives just as we have before in every single moment of our lives.

Full Specifications Of The Xbox X Series Have Been Announced