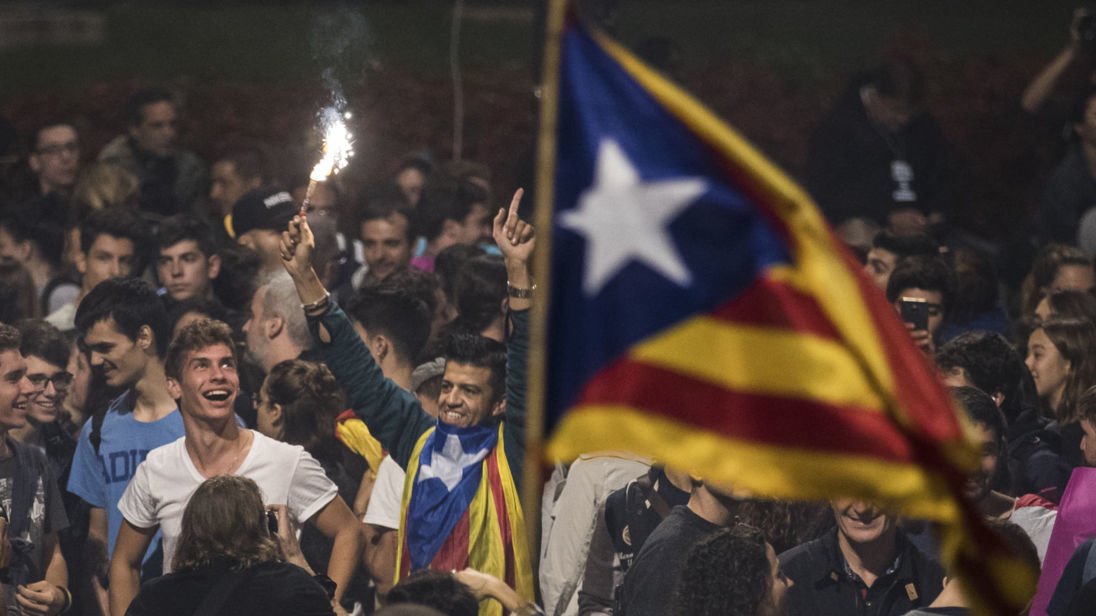 BARCELONA, SPAIN – OCTOBER 01: Crowds gather to await the result of the Independence Referendum at the Placa de Catalunya on October 1, 2017 in Barcelona, Spain. More than five million eligible Catalan voters are estimated to visit 2,315 polling stations today for Catalonia’s referendum on independence from Spain. The Spanish government in Madrid has declared the vote illegal and undemocratic. (Photo by Dan Kitwood/Getty Images)

Catalan president Carles Puigdemont says the region has won the right to become an independent state following a banned referendum that was marred by violent clashes.

Plush News takes a look at separatists’ fight for self-rule.

The northeastern region of Spain is home to 7.5 million citizens and has its own devolved government.

It also has its own language, cultural traditions and the country’s second biggest city, Barcelona.

Prior to the Spanish Civil War (1936-39) the region was given broad autonomy, but this was rolled back under the dictatorship of Francisco Franco.

Catalonia regained autonomy after General Franco’s death in 1975, then secured enhanced judiciary and taxation powers following a landmark vote in 2006.

However, in July 2010 Spain’s constitutional court ruled that parts of the region’s autonomy statute were unlawful and that references to Catalonia as a nation had “no legal validity”.

More than a million people held a march in Barcelona to oppose the ruling.

Decades of separatist tensions have come to a head, with increasing support for the pro-independence cause.

In November 2014, Catalonia’s government held an informal referendum in which more than 80% voted in favour of independence.

It has since fought for the right to hold a legally binding vote and pushed ahead with a referendum despite the firm opposition of the Spanish government.

The yes/no ballot paper asked: “Do you want Catalonia to become an independent state in the form of a republic?”

Preliminary results show that 90% of those who voted backed independence, Catalan officials say.

:: What does the Spanish government say?

After the nation’s constitutional court declared the referendum illegal, Madrid launched a crackdown to confiscate millions of ballot slips.

On Sunday, state police were sent to block polling stations and forcibly seize ballot boxes in an attempt to disrupt the vote.

Violent clashes erupted between voters and security forces, with Catalan officials claiming that at least 844 people were injured.

Prime Minister Mariano Rajoy has refused to recognise that a referendum took place, while foreign minister Alfonso Dastis denied there was an “extraordinary level of violence”.

Mr Dastis told Sky News: “You may think people were peacefully exercising their right to vote but the problem is this so-called referendum had been held to be illegal by the constitutional court.”

:: Why does Catalonia have a link with Scotland?

The cause of Catalan and Scottish independence campaigners is largely the same – both are fighting against centralised powers for the ultimate right of self-rule.

As such, a fraternity between the two campaigns is embraced by top-level ministers and grassroots campaigners alike.

Catalonia’s Estelada flag is a common sight on SNP marches and during the Scottish referendum a group of Catalan firefighters drove 1,500 miles to Glasgow to lend their support.

Meanwhile, FC Barcelona fans threatened to wave Scottish flags at a cup final last year after being denied the right to take pro-Catalan flags to the game.

Last month, First Minister Nicola Sturgeon issued her concern over Madrid’s resistance to the Catalan vote and suggested that the agreement that led to the Scottish referendum was “a template that could be used by others elsewhere in the world”.

While former prime minister David Cameron promised the Scottish referendum was “decisive and irreversible”, Catalonia’s vote is anything but clear cut.

The Catalan government says the referendum is legally binding and if separatists are successful independence must be declared by parliament within two days.

But Madrid does not recognise the legitimacy of the vote and will resist Catalonia’s calls for independence.

Mr Rajoy has offered all-party talks on the region’s future, but faces the prospect of a general strike and mass protests across Catalonia on Tuesday.

The referendum has carried a large amount of symbolic significance.

Separatists say Madrid has suppressed democracy and is guilty of a “grave violation of rights and freedoms” by stopping millions of Catalans from voting.

And Labour leader Jeremy Corbyn is among a number of politicians who have denounced the Spanish government and called for a peaceful solution to the constitutional crisis.