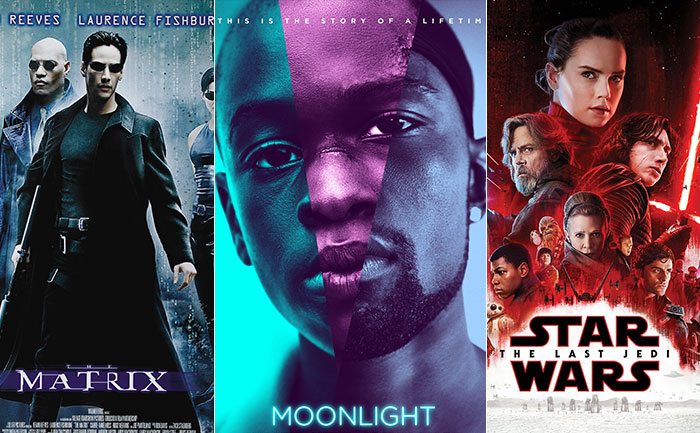 Netflix is a great place to watch movies and TV shows online. However, sometimes the sheer volume of the content offered by Netflix is so vast that picking out a single movie to watch can be quite a task. To narrow down the search field we have picked up the 10 best movies on Netflix that you can stream right now. These Netflix movies vary from cult classics to Hollywood blockbusters. So take a pick from our list of the top movies on Netflix and enjoy.

Martin Scorsese brings the band back together with the dream team of Robert De Niro and Joe Pesci. The two teamed up with Martin Scorsese for 1995’s Casino and the 1990 cult classic Goodfellas. However, the star ensemble doesn’t end there as Scorsese also added legendary actor Al Pacino into the mix as Jimmy Hoffa. This is the longest film by Martin Scorsese with a runtime of 209 minutes.

The Irishman is the story of Frank Sheeran (De Niro). Frank is a truck driver who becomes a hitman involved with mobster Russell Bufalino (Pesci) and his crime family, including his time working for the powerful Teamster Jimmy Hoffa (Pacino).

The movie released on Netflix on 27 November. It was boycotted by a number of cinema chains due to Netflix’s refusal to wait for the traditional 90-day window of exclusivity before getting it to the platform. However, Martin Scorsese has defended his decision to accept Netflix’s financial backing, saying: “Having the backing of a company that says that you will have no interference, you can make the picture as you want – the trade-off being: it streams, with theatrical distribution prior to that. I figure that’s a chance we take on this particular project.”

Netflix recently announced that The Irishman has been watched by over 26m accounts in its first seven days on the streaming service.

If you are a Scorsese fan, you can find his other movies like The Departed and Alice Doesn’t Live Here Anymore streaming on Netflix.

Zodiac is a mystery thriller by David Fincher that released in 2007 and is currently streaming on Netflix. It is based on the 1986 Robert Graysmith book, Zodiac. The film boasts of a talented star cast including Jake Gyllenhaal, Robert Downey Jr., and Mark Ruffalo.

Zodiac is based on real-life events that revolve around the manhunt for the Zodiac Killer. Zodiac was a serial killer in the San Francisco Bay Area during the late 1960s and early 1970s. The Zodiac case is still one of the most infamous unsolved crimes in the US. The film details the manhunt for the killer and one man’s insistence on breaking the case. However, this film doesn’t have the righteous finish associated with true crime films as the Zodiac was never caught.

Coming back to Star Wars: The Last Jedi, the film might have the fandom divided but no one can deny the powerhouse performances delivered by Daisy Ridley, Oscar Isaac, and John Boyega. However, it is the returning Mark Hamill who breathes life into the movie as a broken and bitter man.

After visiting the sci-fi section, take a ride into the Old West with this selection from the vast expanse of Netflix movies. The Ballad of Buster Scruggs is a six-part Western anthology film. It tells a series of tales about the American frontier.

The Coen brothers put together every cinematic trope, conventions, and clichés at their disposal to unveil a new side of the Wild West. It exposes the relentless cruelty, violence, recklessness, and abuse of unchecked power that prevailed in the Wild West. It is a film determined to break the aura of heroism surrounding the Westen legends.

The film won the Best Screenplay Award at the Venice Film Festival in 2018. It received a limited theatrical run on November 9, 2018. The Ballad of Buster Scruggs was released on Netflix on November 16.

This Netflix presentation will check all the viewer expectations of Quentin Tarantino’s movies. It has the nostalgic aesthetics reminiscent of Pulp Fiction complete with quotable dialogues. Jackie Brown resulted in Academy Award nominations Pam Grier and Samuel L. Jackson.

The film is poignantly beautiful, dealing with themes of dependency and recovery. Rachel (Rosemarie DeWitt) is getting married and her younger sister Kym (Anne Hathway) is furloughed from rehab to come home for the big event.

Anne Hathway delivers a fragile but captivating performance as the self-loathing, narcissistic Kym. At moments Rachel Gets Married spirals into being a very sad movie but its spirit of exuberance keeps it from falling down that pit.

If you’re in the mood for some family drama, pick this hidden gemstone from the Netflix collection of movies. Be sure to keep the tissues handy!

Go back to where it all started with the original Matrix. The Matrix franchise has now spawned into video games, magazines, comics, and direct-to-video movies but head over to Netflix if you want to see the origin of The Matrix. It stars Keanu Reeves, Laurence Fishburne, Carrie-Anne Moss, Hugo Weaving, and Joe Pantoliano.

The Matrix was a futuristic cyberpunk movie that blew the audience away when it was released. It depicted a dystopian future where everyone is trapped inside a simulated reality called the Matrix. The Matrix was created by intelligent machines to distract humans as they used their bodies as an energy source. Keanu Reeves plays computer programmer Thomas Anderson. Thomas has a hacker alias Neo. He uncovers the truth, being drawn into a rebellion against the machines. He is accompanied by other people who have been freed from the Matrix.

The Matrix first released in the United States on March 31, 1999. The movie has won four Academy Awards.

Pick out this classic sci-fi from the selection of Netflix movies to revisit Neo at his best.

The 2017 Academy Award winner for best picture, Moonlight presents three stages in the life of the main character, a young, gay African-American man. We get to experience his youth, adolescence, and early adult life. Moonlight explores the difficulties he faces with his sexuality and identity. It also explores the physical and emotional abuse he goes through.

Moonlight is a hauntingly human film that treats topics like poverty, race, and homosexuality with raw honesty.

Trainspotting is a 1996 movie based on the Irvine Welsh novel by the same name. The film is directed by famed director Danny Boyle and stars Ewan McGregor, Ewen Bremner, Jonny Lee Miller, Kevin McKidd, Robert Carlyle, and Kelly Macdonald.

The story centers around a Scottish miscreant Renton who is a drug addict. He tries to mend his ways by moving to London and starting a new life. However, his circumstances and friends pull him back into the same cycle.

Steven Spielberg’s 1981 classic Raiders of the Lost Ark has long achieved the status of a pop-culture legend. Raiders of the Lost Ark is a honest-to-god movie full of cliffhangers and fistfights with iconic heroes and dastardly villains. The story revolves around Indiana Jones who sets out in search of a highly coveted biblical artifact called the Ark of the Covenant. The Nazis make as formidable opposition for Indiana Jones in his search.

Pop in this old-time classic from Netflix movies if you are in the mood for a Steven Spielberg take on a James Bond movie.