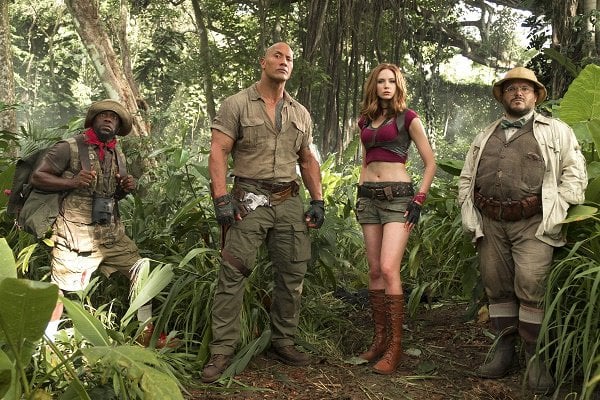 Sony Pictures on Monday released the official trailer for ‘Jumanji: The Next Level’, the next installment of the long-running franchise.

The movie, which is a sequel to 2017’s ‘Jumanji: Welcome To The Jungle’, sees Dwayne ‘The Rock’ Johnson, Kevin Hart, Karen Gillan, and Jack Black return back to the jungle for another epic adventure.

In the upcoming movie, the players journeyed to Jumanji only to find the video game world looks a little different. They will have to brave parts obstacles in order to escape the world’s most dangerous game.

Everything you know about Jumanji is about to change… 🎮 Watch the trailer for #JUMANJI: The Next Level now and see it in theaters this Christmas! 🐒🎉 pic.twitter.com/iKserUBDbM

There are also new additions to the franchise including Awkwafina, Danny DeVito, and Danny Glover.

The movie is directed by Jake Kasdan and written by Kasdan, Jeff Pinkner and Scott Rosenberg. It is based on the book Jumanji by Chris Van Allsburg.

‘Jumanji: Welcome to the Jungle’ became a huge box office smash, grossing over $962 million worldwide. The follow-up is expected to hit theaters on December 13, 2019.

Joel currently hold the spot as Founder/CEO of PlushNg. He likes spending his free time watching out for the latest movie releases. He is a Journalist, who loves to explore the world through his own eyes. He is a keen learner, WordPress Lover, and an SEO specialist. You could contact him at joel.odu[email protected]