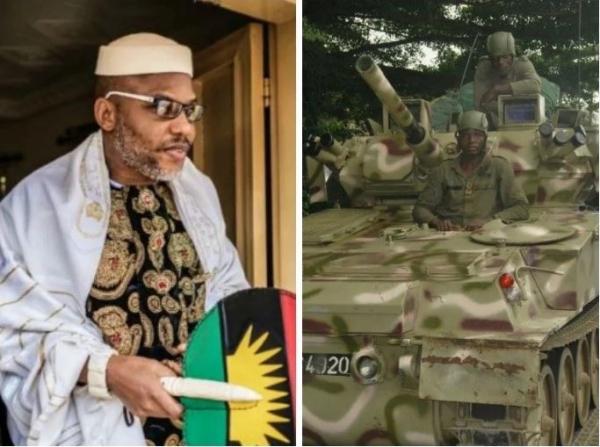 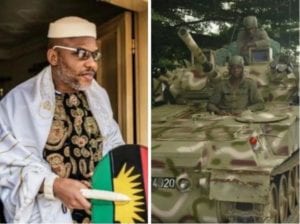 – Kanu’s brother claimed he has been killed by the army

An international media, Reuters, has written about the disappearance of the leader of the Indigenous People Of Biafra (IPOB), Nnamdi Kanu saying it could destabilise the country.

Kanu has been missing since an alleged raid on his house by the army during the Operation Crocodile Smile and Reuters said this could ignite unrest that could affect the country.

Kingsley Kanu who is the brother of the IPOB leader said he was with him the day soldiers invaded their compound.

He said: “They were shooting everything they saw,” he said, pointing to bullet holes in walls and windows.

“They came here just to kill everybody,”

Reuters said its cameraman and reporter “saw six corpses with bullet wounds in a morgue.”

Malte Liewerscheidt of global risk consultancy Verisk Maplecroft spoke about the situation saying the “government’s heavy-handed approach will only shore up local support for a radical group that previously struggled to broaden its base.”

Ryan Cummings who is the director of Africa-focused risk management company Signal Risk sad the government has failed to deploy the military in handing the issue of Fulani herdsmen attack.

He said: “The government has allowed insecurity to burgeon in other areas of Nigeria without similar deployments.”

Onyebuchi Ememanka who is the special adviser to the Abia state governor spoke to Reuters saying the sight of the soldiers scared the people.

He said: “The presence of the army scared our people. People spoke about what happened during the Biafran war.”

“There were no serious security challenges that would justify the deployment of troops.”

He described the formation of a national guard and secret service in the last few weeks as a “new dimension.”

Kanu’s brother said of his disappearance: “If they [the army] have killed him, let them give us the corpse.”

Reuters said that Liewerscheidt noted that “if Kanu were to die at the hands of the authorities parallels could be drawn with the origins of the Boko Haram insurgency that began after the death of Mohammed Yusuf, the Islamist militant group’s founder, in police custody.

“This would likely transform IPOB into precisely the terrorist organization the military claims it already is.”

Meanwhile, the Lawyers of Conscience (LAWCONS), a professional association, called for the arrest of Ifeanyi Ejiofor, the counsel to Kanu.

The group alleged that Ejiofor, aside being a lawyer, is also a member of the outlawed IPOB.

LAWCONS said the lawyer and other members and supporters still working for IPOB in the country should be arrested because it is an insult on Nigeria that IPOB led by Kanu could have the mind to file a suit before the Federal High Court in Abuja seeking for an order directing the Chief of Army Staff, Lt-Gen Tukur Buratai, to produce its leader in court.