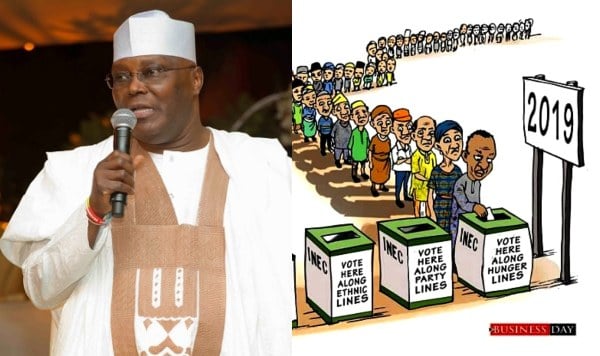 Atiku Abubakar has reacted to report of APC promising South East and South West Presidency in 2023, only if they vote for Buhari.

The PDP Presidential candidate who told the two geo-political zones to take their destinies in their hands by doing the right thing in the 2019 general elections, accused the ruling All Progressives Congress, APC, of trading with 2023 in a bid to return to power at all cost.

The statement from Atiku Abubakar reads in full;

“In its desperation to hang on to power despite its abysmal failure so far, the All Progressives Congress, APC, and the Presidency, have resorted to trading with the lure of 2023 presidency, promising both the South East and South West respectively of the 2023 Presidency in exchange for votes.

“Giving out two promises has exposed the insincerity and dubious intention of the Buhari-led federal government with the people of the South-East and South-West geopolitical zones with empty promises of bequeathing power to the two zones at the same time in 2023. This is why Nigerians cannot take the APC and the Buhari presidency serious any longer, as we prepare for the 2019 election,” Atiku said in the statement.

“Speaking on behalf of Presidency in Owerri last week, the SGF told the gathering that the President would hand over the reins of power to a South-Easterner, while calling on the people to support President Buhari in 2019.

“Meanwhile, Vice President Yemi Osinbajo had also told leaders of the South-West to support the re-election of President Buhari so as to get the presidency in 2023.

According to PDP campaign council, “two principal officers of the same government cannot be fooling Nigerians with vainglorious promises all in the name of re-election. Such discordant tunes by the first and second citizens of our dear country have exposed lack of synergy, and display of double standard and double-speak by chieftains of a government that has continued to display wanton desperation to hold on to power at all cost in the face of monumental failure.”

The statement continued: “How can the President be promising South-Easterners the Presidency when his Vice President is also promising the South-Westerners same position in 2023, all in the name of 2019 re-election?. “This is a clear show of deceit, desperation, crass insincerity and hypocrisy of the highest order. This is a clarion call on the South-Easterners not to trust such carrot being dangled before them as it has become obvious that this government neither fulfils promises nor keeps any convenant.

“The same government cannot promise the Igbos and Yorubas at the same time if it were sincere about the shape of politics of 2023 Presidency. This government has an uncommon reputation for deceit, lies, insincerity and hypocrisy especially when it has to do with its 2019 re-election bid.

“Nigerians are beginning to see through the pretensions and dubiety of purpose of the Buhari-led federal government; a government that has shown its incapacitation and leadership atrophy in the last three years and crippled the fabric of our collegiate solidarity and unity through nepotism and cronyism.

“The President cannot on the one hand be playing God by decreeing which zone it intends to bequeath the reins of power, while his Vice President on the other hand is also promising his South-West zone of same position. This is a typical feature of power hawkers, in their desperation to hoodwink buyers to patronise their morbid products.

“The Nigerian public must wake up to this double-speak and vote out this inconsistent government in 2019. It is a responsibility that every Nigerian must buy into in order to save the country from further maladies and misgovernance.”