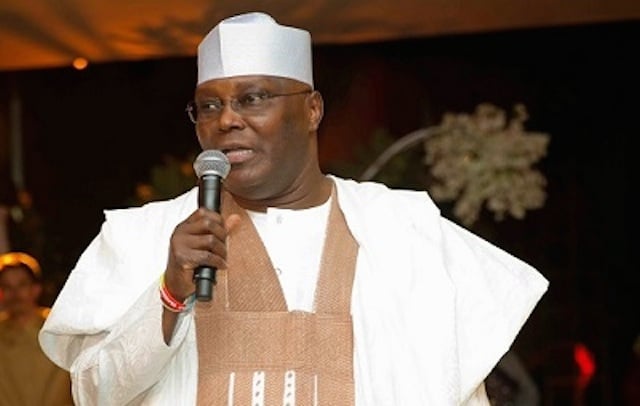 The Peoples Democratic Party (PDP) on Friday, urged former Vice President Atiku Abubakar to return into the party’s fold as following his resignation from the ruling All Progressives Congress (APC).

The party however ruled an automatic ticket for any party member, saying whoever is interested in contesting an elective office, including the former Vice President, must be prepared to submit to constitutional provisions in the spirit of democracy.

Speaking at a press conference at the party’s secretariat, National Publicity Secretary, Prince Dayo Adeyeye noted that as a founding father of the PDP, the erstwhile number two citizen remains a true PDP man to the core.

He said: ” The PDP is democratic party. If you come in, you are free to contest elections once you meet our constitutional requirements, but we can’t give our ticket to‎ anybody like that (automatic).

The party, apparently basking in the euphoria of Atiku’s exit of the APC, also extended the olive branch to the ex- Vice President, urging him to return home (PDP).

The former Vice President, Atiku who was one of the founding fathers, contested and won elections as governor of Adamawa State on the platform of the PDP.

But before he was sworn in, he was nominated by Olusegun Obasanjo as his running mate and they were sworn in as President and Vice President. Again, they both ran in 2003. So, he is a true PDP man to the core.

However and unfortunately in 2013, they were deceived into believing that there was a platform that would correct all the ills in the PDP and that it could create an Eldorado in Nigeria.

We believe Atiku Abubakar has come to know the truth like he said in the statement that he has now known the truth, that the APC is not what they call themselves…That platform ( APC) is the worst platform in the history of politics in Nigeria,” Adeyeye said.

CLICK HERE TO JOIN OUR EVER ACTIVE WHATSAPP GROUP
Related Topics:AtikuPDP
Up Next