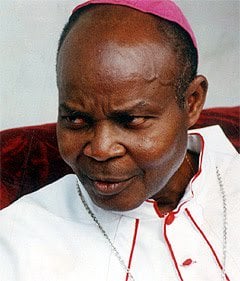 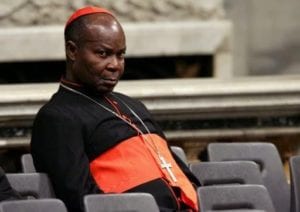 The Archbishop Emeritus of the Catholic Archdiocese of Lagos, Cardinal Anthony Olubunmi Okogie, has slammed the General Overseer of Redeemed Christian Church of God (RCCG), Pastor Enoch Adeboye, over his decision to have as many branches of the church as possible.

Condemning such multiplicity of branches, the patriarch of the Lagos Catholics described such branches as “mere business centres,” insisting that there was indeed no godliness in planting churches in close proximity.

The Cardinal noted that the mushrooming of such churches has not elicited commensurate level of godliness across the land.

In an interview with New Telegraph newspaper, Okojie said: “In order to bring us together and to get sanity back into this country, the fear of God must be number one. Nigerians of today don’t care a hoot about God.

“What kind of churches are you talking about? Look at traffic in Lagos for example, and those who are pastors are traders and a good number of them are business men. Such churches in most cases are more like business houses! Look at the number of churches springing up in Lagos. If the Muslims start building mosques like that, does it show that Nigeria is a religious country?

Every day we hear of killings and other things that we were not hearing before.

“We can’t even walk on the streets freely. You have to be watching yourself left, right and centre to know who the man coming behind you is. It wasn’t like that before. Churches must ensure that there is fear of God.

“And I’m just telling you that those churches that he is talking about are just business centres.”

Just In: FG Has No Hand In The Spread Of Monkey Pox, Says Lai Mohammed