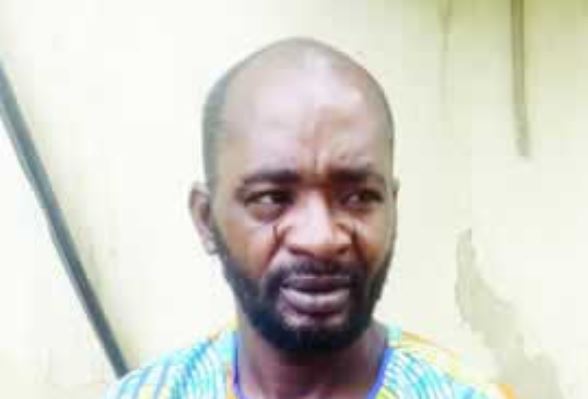 NewTelegraphonline reports that according to Adeyemi, he and his gang members, KK and Nonso, only wanted to rob Hector and collected his money, but their trigger-happy partner, KK, shot the star dead.

Recollecting how Hector was killed and his father shot, Adeyemi explained that he and his partners were driving around, scouting for whom to rob, when they sighted Hector in his red car, driving into a close that leads into the estate at Oko-Oba, where he lived.

Acting on a hunch that they would get money from him, KK, the leader of the gang, ordered that they should tail Hector’s car. Before they could catch up, Hector had driven into his compound. The robbers were confused. They sighted a woman and told her that they were looking for a red car that sped off after bashing their car. The woman innocently pointed to Hector’s compound. They followed.

Soon, gunshots rocked the early morning air. The Lagos State Commissioner of Police, Mr Imohimi Edgal, explained that Adeyemi was the prime suspect. He said Adeyemi, a former filling station attendant at Apapa Wharf area of Lagos, pulled the trigger that killed Hector and landed his father in the hospital.

Speaking with journalists yesterday, Adeyemi vehemently denied the police allegation that he killed Hector and shot his father. He said: “I was not the person that shot Hector; it was my friend, KK, who shot him. I even quarrelled with him for shooting the guy. It was KK that led the robbery operation. When I asked why he shot Hector, he said that Hector wanted to grab him, possibly to struggle with him.

I reminded him that our agreement was to only rob people and collect their valuables, not to kill. KK got angry and threatened to shoot me. In fact, he even pointed the gun at me. We met a woman inside the compound and asked her the flat that Hector entered, but she refused to cooperate. It was at that point that KK brought out the gun and threatened to shoot her. She was scared and took KK upstairs.

I was downstairs with Nonso when we heard gunshots. KK called us to come upstairs. We got upstairs and discovered that KK had shot Hector and his father. KK first shot the father and later shot Hector when he came to know what was happening. We snatched Hector’s bag and phone and left. When we opened the bag, we found only a pair of shoes, boxers and flower. I took his phone.” Adeyemi said he gave the phone to his younger brother who sold the phone for N7,000 at the Ikeja Computer Village.

According to him, he gave the brother N2,000 while he pocketed N5,000. Policemen tracked Hector’s stolen phone to the Computer Village. They arrested the trader who bought the phone and later used him as bait to catch Adeyemi. KK and Nonso are still at large.

Adeyemi explained that he joined robbery after he met Nosom at Apapa and became friends with him. He said that Nonso introduced him to KK. He added: “I have done two operations with the gang. The second operation was at Oko- Oba; that was the day KK killed Hector. Even on that day, Nonso and KK were speaking Igbolanguage. I didn’t understand what they were saying. When we got there, two of them also spoke with one lady who directed them to the house of the guy.

We were three that went for the operation. When I went to meet KK with the guy, they were arguing. I don’t know what they were arguing about because they both were speaking in Igbo language. We took his hand bagand found only boxers and shoes. There was no money.”

Edgal said that the suspect led operatives to Gas Line, Ijoko at Sango where his operational pistol with nine rounds of live ammunition was recovered. He added that Adeyemi confessed to the crime and admitted to other various criminal activities within the state

“We followed him, but did not know where he entered”- Suspected Killer of GUS 3 winner