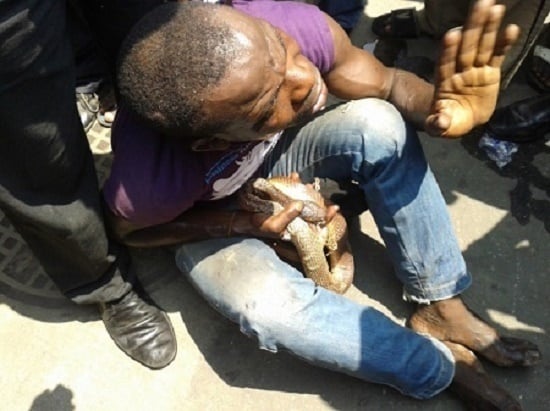 A notorious thief has been left with the shock of his life after the wallet he snatched from a traditional healer turned into a deadly snake.

A shocking incident has left people baffled after they watched as a wallet turned into a deadly cobra in the hands of the thief as a result of black magic. The incident happened on Monday morning in Ghana.

Adom Online reports that the 27-year-old thief identified as Mdu had snatched a wallet from an alleged Sangoma’s pocket (Sangoma is a traditional healer), but shock and surprise took over people’s faces as the wallet turned to a cobra as he tried to open it.

An eye witness revealed that Mdu tracked the alleged Sangoma who was about to board a taxi and confessed that he stole his wallet and wanted to return it.

“He stole a wallet from an old lad, people around are just saying the old man is a Sangoma but no one knows the man around. When he snatched the wallet he went behind that billboard that’s when the wallet turned into a snake.

“Now he tracked the man and found him but the problem is the old fellow is denying his wallet, he even produced a pouch like wallet as proof to show that the snake wallet wasn’t his.

“The snake is not biting him but its stuck in his hands he failed to throw it way, this is first grade black magic.

“The police just come after a commotion but they ignored the case, I am not sure what he is thinking right now but if the owner denies the wallet they will have to visit a popular local sangoma to cast out the spell,” he said.

A police officer who was at the scene, revealed that they can’t do anything about it but have only called the Parks and Wildlife management department.