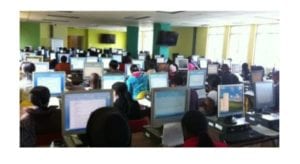 The Joint Admission and Matriculation Board (JAMB) has reportedly placed a ban on the use of 16 electronic devices at the UTME mock examination which is to hold on February 26, 2018, across different venues within the federation.

According to the memo released by JAMB on Thursday, UTME officials manning operations at different examination centres have been authorised to inspect items such as eyeglasses (which could be a spyglass), wrist-watches, sophisticated pens, calculators and any other electronic devices that could seemingly compromise the orderliness of the examination. Officials are also allowed to confiscate any devices as they deem fit.

However, this mandate isn’t restricted to students. Punch reports that according to the memo issued by the UTME Monitoring Groups, JAMB’s officials and all other authorised persons are also bound by the same rule. Hence, if they are found with related items in the examination hall, they would be seen as saboteurs. Necessary actions would be meted upon such defaulters.

The banned 16 items include:

The 2017 JAMB examination was plagued with lots of malpractice cases. Officials reportedly accepted bribes from students, 48 CBT centres were blacklisted and over 10,000 students were caught in malpractice in Anambra alone.

JAMB Registrar, Professor Is-haq Oloyede, had in 2017 stated the board’s intention to truncate any activities of malpractice from both from students and operators. This initiative is probably a spinoff of that decision and could, in a way, prove effective, if JAMB’s detection equipment is solid enough.

JAMB/UTME Monitoring is in collaboration with the Civil Society Group (CSG) — a group inaugurated by JAMB Registrar — to carry out this mandate at all verified JAMB centres.