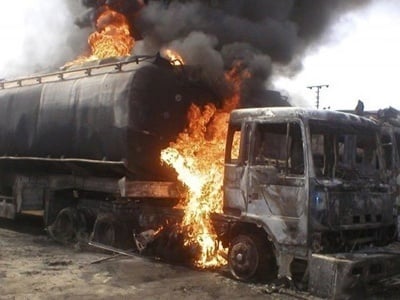 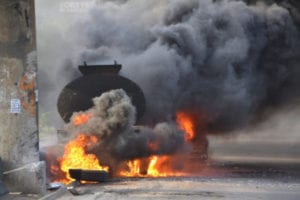 Five people were confirmed dead on Saturday after a fuel tanker exploded at Tafa village along the Abuja-Kaduna Expressway.

According to an  eyewitness, the tanker laden with kerosene was trying to avoid dangerous potholes on the road when it suddenly fell by the roadside and burst into flames.

Two of the deceased were said to have been killed after inhaling fumes from the flames and the other three were burnt by the fire.

According to reports, many others who sustained severe burns have been hospitalised while several vehicles parked by the roadside were burnt to ashes.

Thousands of Abuja-Kaduna bound passengers are said to have been left stranded following the incident.

He, however, said they could not ascertain if lives were lost in the incident or not.

The busy Kaduna-Abuja highway links the Federal Capital Territory with the North West and North East, with thousands of vehicles plying it every day.

It also links the North with the South through Lokoja, the Kogi State capital.