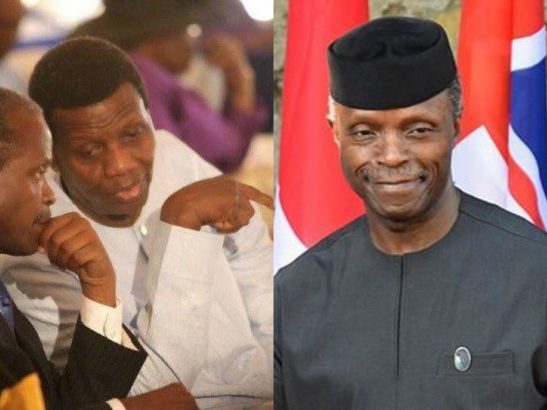 Ahead of the 2019 general elections, VP Yemi Osinbajo has revealed what Pastor Adeboye of the Redeemed Christian Church of God told him before the 2015 presidential election which saw him emerge as vice president.

Osinbajo revealed this yesterday when he spoke at a special day of prayer for the general election, organised by the Christian Association of Nigeria (CAN) Plateau State Chapter, at Eliel Centre, Jos.

“I urge you to continue to pray and fast for those of us in government; especially, pray for me and the Saturday elections,” Osinbajo said.

Osinbajo went on to speak on what God did for him after he survived a recent helicopter crash.

“God gave me a verse in the Holy Bible of Luke 13:13, and I know the devil can not interfer with the plans of God for this nation.

On what Pastor Adeboye said before he was elected vice president:

“When I was picked as the presidential running mate in 2014, I ran to meet my father, Pastor Adeboye, and told him.

“Since it was the will of God, he told me, four times, that I would be the vice president of Nigeria and he blessed me.”

CLICK HERE TO JOIN OUR EVER ACTIVE WHATSAPP GROUP
Related Topics:Pastor E.a AdeboyeYemi osinbajo
Up Next

$1.7 Million Dollar House In Exchange For Just A Letter (See How To Participate)