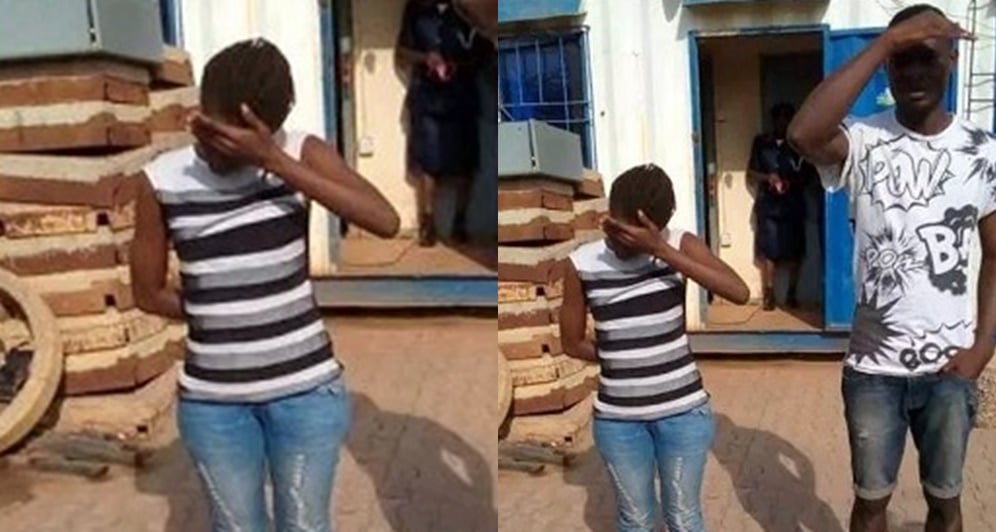 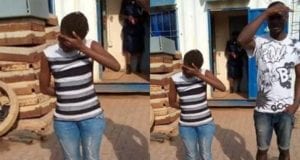 The commandant, who revealed that Miss Akpabio concealed the mobile phone in her pant, said she was caught on CCTV cameras while using the phone to cheat.

Master Etziuala on the other hand, was said to have supplied her answers to the questions through text messages.

The answers, Dr. Benjamin said, dated back to 1990 JAMB questions and not that of 2018 questions.

The board had banned the use of mobile phones and other electronic devices from examination centres.

“We have in our custody today two suspects that were involved in examination malpractice in the ongoing JAMB UTME. Their level of involvement are as follows, a lady whose name is, went into the exam hall with a telephone handset and this is against the rules covering the JAMB examination.

“She concealed the telephone set inside her panties and she went in un-detected and while the examination nation was going on, she brought it out.

“With the use of modern technology; you know the examination centres have CCTV cameras that are sending live transmission of activities that are taking place in the examination hall, and the activities of our men and other JAMB officials who were deployed to the centres, we were able to detect what she was doing and she was immediately arrested.

“Upon interrogation, we were also able to arrest her accomplice who is another young man by the name Andrew who introduced her into the business and was equally involved in sending text messages of supposedly answers to the examination she was doing.

“They are in our custody now and we are going to carry out further investigations regarding their involvement and to know if there are other accomplice, he will equally be traced and arrested and thereafter, they will be prosecuted in a law court.

Dr. Benjamin noted that their arrests would serve as a deterrent to other candidates.

Benjamin, who said the board would continue to maintain the integrity of its examinations, added that its partnership with NSCDC would ensure that any candidate caught bridging its rules are arrested.

[Also Read]  How to find your lost phone: Track and locate your Android phone(2018)

“Just as the commandant has said, we are doing this not because she has been arrested, we want this to serve as a deterrent to other candidates. This particular candidacy was spotted from our headquarters, web have made it clear that all our centres are covered by CCTV cameras.

“We are also monitoring what is happening in all the centres from our headquarters. We got a report that something was happening in Baptist Academy, Karu, and we immediately dispatched a team who went there and go the candidate arrested.

“We want to sound it very clear that there is no shortcut success. It is no longer business as usual because you will be spotted if you do anything in the examination hall.

“This particular candidate went into the hall with her phone and text messages were sent to her, but we discover that the answers were for 1990 JAMB questions, they are not for 2018 questions at all. You can see the level of deception. Even if she wasn’t arrested, she would have failed.

“We want Nigerians to know that the sanctity of this examination is very sacrosanct. We will not allow anybody to destroy what we are doing, we will continue to partner with NSCDC to ensure that whoever attempts to bridge the rule of the game is arrested.

He added that over one million candidates had written the examination which commenced last Friday.

Miss Akpabio, confessed that she hid the phone to beat the security checks and that she was caught in the examination hall when she brought it out for usage.

“I was caught with a phone in exam hall. Actually, I was about bringing out the phone to make use of it and they saw me.”

When asked if she was aware that she was not supposed to go into the examination hall with a phone, she said yes. “It was just an accident.”

Akpabio, who said she applied to study Business Administration, added that she had sat for JAMB for more than four times and had been unable to secure admission.

She claimed that other candidates were using their phones when she was caught.

Etziuala who was sending answers to her phone explained that the answers were generated by another member of the syndicate operating from a Business Centre in Jikwoyi.

He said the suspect at large, allegedly hacked into JAMB examination questions and generated answers which were forwarded to him (Etziuala), who in turn forward them to Akpabio in the examination hall.

Etziuala, who said he was a student of Federal Polytechnic Nasarawa, said he regretted his action describing it as a big mistake.

“I did not know it will lead to something like this. I am just bothered that this has tarnished my image and others should learn from it,” he said.

culled from The Nation